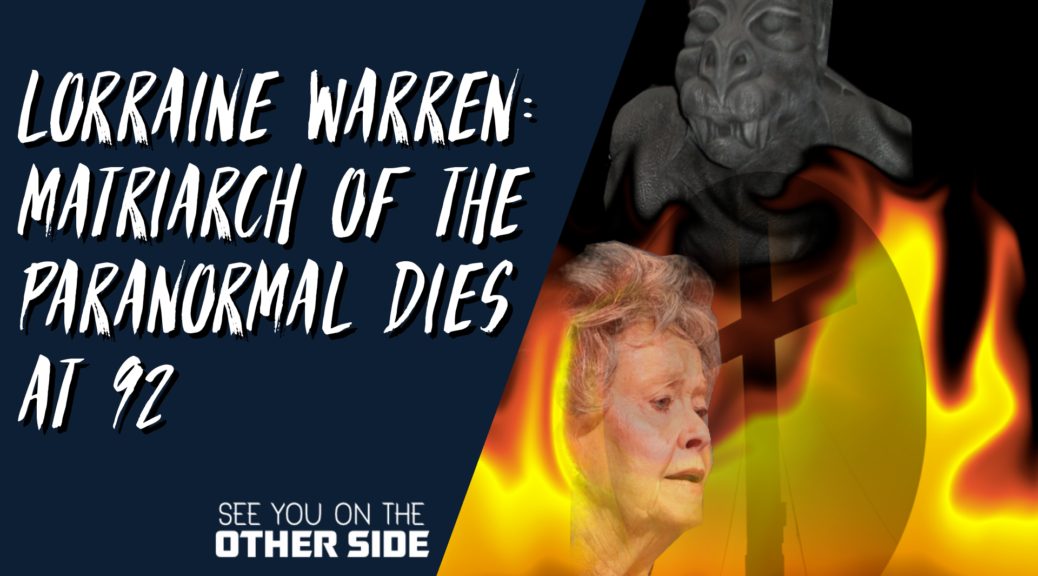 It’s a rich and storied life that is immortalized in popular film. I would consider myself lucky to one day be essentially sainted by the paranormal community and played onscreen by the likes of Vera Farmiga.

In reality no one is actually a saint and Lorraine Warren and her husband Ed, who died in 2006, certainly had their detractors. But no one can deny that the Warrens were trailblazers in the field for good or ill, or both, as is usually the view history.

Lorraine Warren died April 18th at her home in Connecticut at the age of 92. In life, she claimed to be both a clairvoyant and a trance medium. She and her husband Ed, a self-described demonologist, founded the New England Society for Psychical Research (N.E.S.P.R.) in 1952.

N.E.S.P.R., in contrast to other societies of psychical research, took a religious approach rather than a scientific one to their alleged 10,000 paranormal investigations. The Warrens believed that the entities responsible for hauntings were not “vaporous, indistinct phantoms”, but forces that “exist for the sheer purpose of opposing the works of God”.

They further claimed, according to their website, to have been repeatedly called in by “religious authorities . . . to control some of the most profane outbreaks of diabolical phenomena in the country”. However, it is unlikely that they actually worked with the Catholic Church, as they often claimed, at least in an official capacity.

Lorraine Warren had recently retired from active investigations and personal appearances. She still consulted for N.E.S.P.R., although she passed the directorship to her son-in-law, Tony Spera.

As paranormal personalities the Warrens undeniably led the way in developing opportunities for psychical researchers on the lecture circuit and in the media. In 1952, in addition to founding N.E.S.P.R., they opened the Warren’s Occult Museum. They went full-time paranormal in 1968. By 1974, the Warrens were employing a booking agent to find them paying gigs and writing a regular column about their adventures for a weekly tabloid, The Tattler.

Many claim that Lorraine and Ed lived to help those besieged by evil forces. Yet there also are many who have called the Warren’s credibility into question including at least one psychical researcher who didn’t appreciate them showing up to assist on his case uninvited. One thing is for certain the Warrens are among the most famous paranormal investigators in the world and how they are viewed influences how all other psychical researchers are perceived.

The Warren’s website advises “The devil exists. God exists. And for us, as people, our very destiny hinges upon which one we elect to follow.” Unfortunately, for most of us in the paranormal, the path to credibility is seldom clear. Hopefully, we in the field, will learn everything there is to learn from both the light and the dark views of the lives of Lorraine and Ed Warren. Perhaps familiarizing ourselves with both sides of the story will lead us to a more balanced perspective and help us to more carefully select only the attributes we wish to emulate in their example.