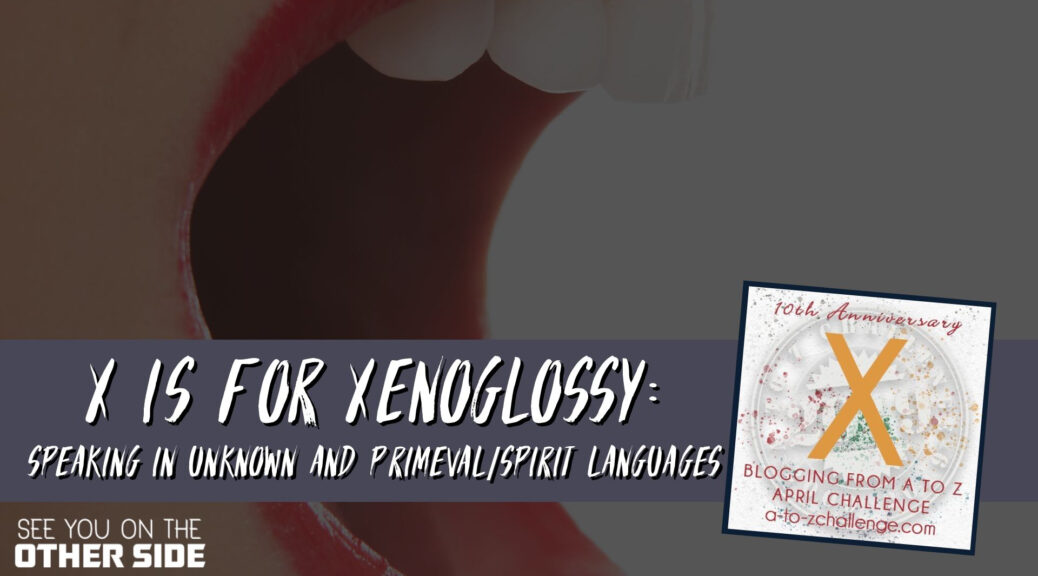 As we approached the last few letters of the 2019 A to Z Blog Challenge, the letter X loomed ominously before me. With so few “X” words in the English language, let alone in the subset of paranormal topics, what would make for an interesting topic to write about? Luckily, I found a word that will surely remain in my back pocket for future Scrabble games that also describes a fascinating paranormal phenomenon: XENOGLOSSY!

Derived from the Greek words for “xenos” (foreigner) and “glossa” (tongue or language), Xenoglossy is a term purportedly coined by French parapsychologist Charles Robert Richet. He is also credited with originally using the word “ectoplasm”, the slimy substance that would materialize at seances during the Spiritualist movement and was fondly popularized by the character of Slimer throughout the Ghostbusters movies. Richet was adamant about finding scientific explanations for paranormal phenomena and did extensive investigating of psychic mediums. But his research led him to believe that mediumship was a form of extrasensory perception rather than communication with the dead, as many mediums claimed.

At Spiritualist seances, a popular activity was for a psychic medium to “channel” the spirit of someone who had passed on. The voice and/or accent of the medium would change to align with the personality of the deceased, and even their mannerisms and facial countenance would appear different (remember Whoopie Goldberg’s character in “Ghost” when she channeled the Patrick Swayze character?). While this activity could be exhilarating for friends and relatives witnessing the medium in action, it’s a party trick rife for fraud.

Much more perplexing (and difficult to fake) is the situation wherein a person appears to channel someone fluent in an entirely different language. This is not the same as speaking in tongues, or “glossolalia”, which is a more random vocalization common to certain religious movements. Xenoglossy is when real language emerges from someone.

Many believe that Xenoglossy is evidence that spirits can indeed be contacted from beyond by using a human vessel or channel. One medium from the Spiritualist movement, Laura Edmonds, who natively spoke English and knew just a bit of French, would converse fluently with visitors from afar in Spanish, French, Greek, Italian, Portuguese, Latin, Hungarian, and Native American languages. Although Laura was doing the talking, she appeared to be channeling deceased friends of her visitors. Her father, John Worth Edmonds, was a well respected judge and initially claimed to be a skeptic. But after witnessing his daughter’s multitude of paranormal experiences, he eventually experimented with mediumship himself and became an advocate. I have to admit, if one of my trusted family members started having fluent conversations in a language they never studied, I’d probably become a quick believer, too!

Other cases of Xenoglossy suggest that it is proof of reincarnation. In some instances, the person speaks a very ancient language that has been extinct since well before the medium’s time. One such controversial case involved an English medium known as Rosemary who claimed to be controlled by an ancient Egyptian “Lady Nona”. She was reported to have used 140 different phrases common at the time the Temple of Luxor in Egypt was built, as confirmed by reputed Egyptologist Howard Hulme.

A more modern example of Xenoglossy occurred in 2007, when a Czech motorbike racer suffered a serious crash while racing in Glasgow. Although he was known to have a very limited English vocabulary, apparently while being rescued he spoke English fluently with the paramedics.

Whether Xenoglossy is truly an example of spirits from beyond crossing into our human realm, proof of reincarnation, or something else going on, it’s a phenomenon that currently defies explanation and therefore is worth examining further. And if that’s not enough for you, it’s worth 21 Scrabble points, so file that spelling in your paranormal Rolodex for your next board game night!