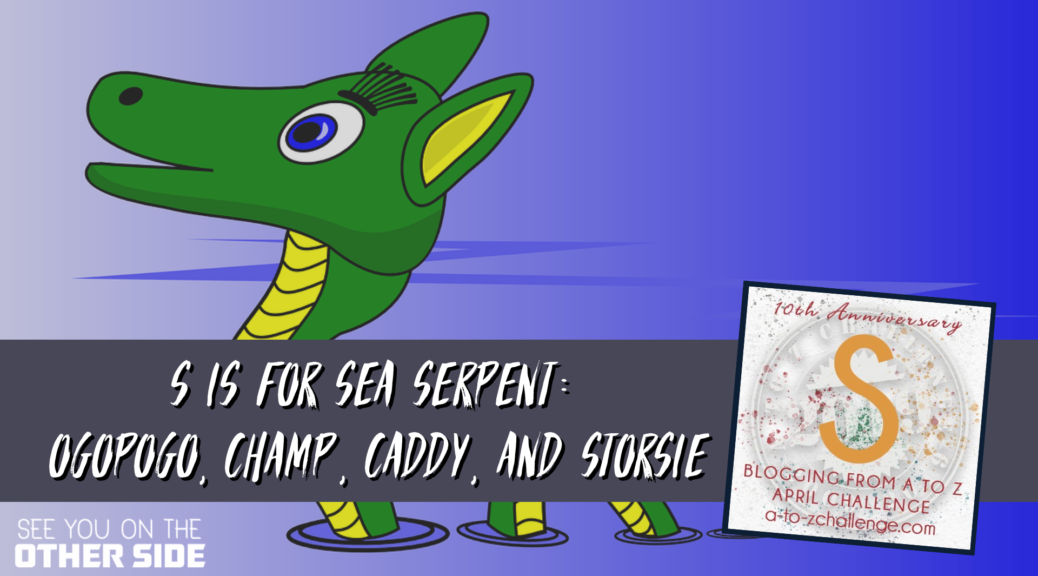 if you’ve ever passed a moving body of water and seen something, barely sticking from the surface, you’ve probably had a fleeting moment of wondering Could that be a monster–like Nessie? Odds are, what you saw turned out to be a stick, a turtle, or even a snake–or maybe just some garbage. After all, Nessie is just from Scotland, right? There aren’t any other sea/lake monsters, are there?

Not surprisingly, there are. Some scoff at this notion and say that swells on the surface of a body of water are caused by underwater currents, or that stationary objects, like submerged trees, create the illusion of something swimming, when really it’s just water flowing around the object. They say that this optical illusion causes us to fill in the gaps and imagine a monster.

Others argue differently. They say there are undiscovered, aquatic cryptids around the world. They have photos, witness accounts and even videos of these alleged creatures. Aquatic monsters are everywhere, it seems.

Ogopogo hails from Canada–Okanagan Lake, to be specific, in British Columbia. It has allegedly been seen by natives since the 1800s, and is described as a 40-50 foot sea serpent, like the Mosasaurus.

In 1946, thirty carloads of people reported seeing the creature from Okanagan Mission beach. In 1968, the creature (or, at least, it’s wake) was filmed moving across the lake. In 2011, Ogopogo was captured–on cell phone video

This isn’t the Americas’ only swimming cryptid, by the way. Champ and Caddy are two more cryptids reported in North America. Champ hails from Lake Champlain, which is near Quebec, New York, and Vermont. Sightings go back to before 1609, when the first European settler (Samuel de Champlain) reported the cryptid, describing it as “20-foot serpent thick as a barrel, and a head like a horse”.

On the other side of the continent, back in the Pacific Northwest, Ogopogo’s cousin, Caddy (short for Cadborosaurus) has been sighted in Cadboro Bay, British Columbia for more than 200 years. Like Nessie and Ogopogo, Caddy too has purportedly been photographed and filmed, and is reported to resemble a “huge sea serpent with a horse-like head”.

Leaving America, and crossing back to Europe, one needn’t return to some of the other Lochs in Scotland to search for lake monsters (although several other Lochs also claim to have them). Instead, you could journey to Sweden in search of Storsjöodjuret, a lake serpent seen in Lake Storsjön in Jämtland, and described as looking like a serpentine or aquatic reptile with fins across its back and the head of a dog.

If you strike out in Sweden, fear not, a quick trip to Norway could put you on the track of Selma, a large, snake-like creature believed to reside in Lake Seljord in Seljord, Telemark, Norway. If you aren’t sure what you’re looking for, fear not, Selma appears on the coat of arms of Seljord.

There are many, many more alleged aquatic beasts around the world. Until 2016, you could go to Vietnam and would probably catch a glimpse of such a beast–Cụ Rùa (“great grandfather turtle”), a giant, soft shell turtle of the species Rafetus leloii, which resided in Hoàn Kiếm Lake in Hanoi, Vietnam. There are also countless of tales of giant fish seen as monsters–like the rumored man-sized catfish of Lake Cumberland, Kentucky, or Alaska’s Iliamna Lake Monster, Illie.

It seems that wherever there’s a body of water, there be monsters. Remember that the next time you go swimming and aren’t sure just what that is in the water, just below the surface, heading towards you…