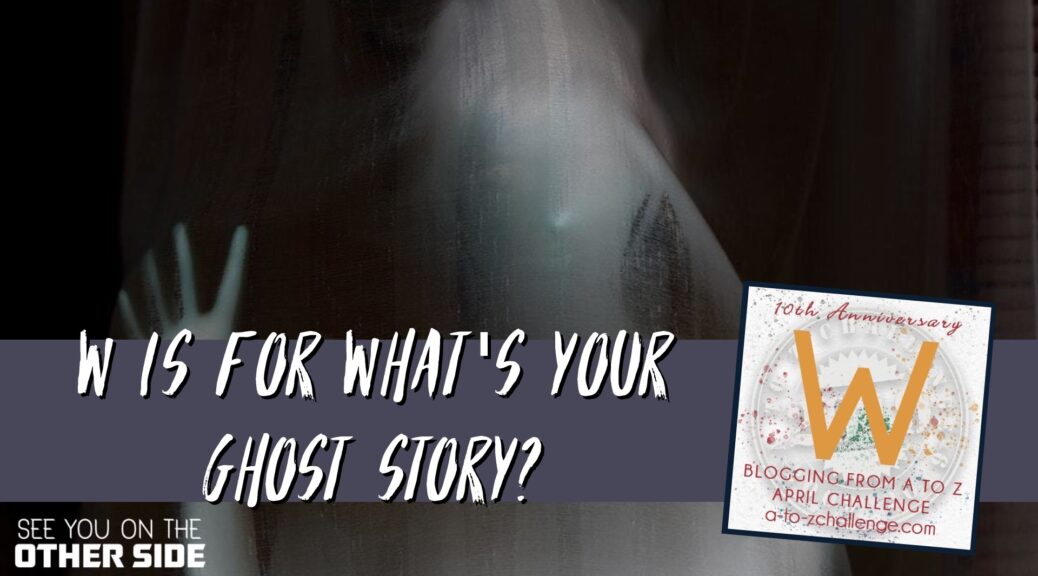 Ages ago I put a very amateur documentary… it was basically a just-for-fun, home video–style presentation where some friends and I went to haunted locations across Chicago and told ghost stories while on-location. This was in 1999, several years before the first ghost hunting shows are on television. I don’t even know if the term “ghost hunting” was even a thing yet.

I had a website for my production company and I posted information about this documentary. An incredible thing happened. Somehow people found the website and began sharing their ghost stories. They commented on each other’s ghost stories. They began sharing information to help filling in gaps of knowledge about historic sites.  Soon, the web site was getting upwards of 60,000 visitors per month and was an absolute repository for all things spooky.  A community was born.  I rebranded the web site, from the production company Slim Pictures, to the call to action, WhatsYourGhostStory.com.

I learned a lesson in the process: The most important thing about what we do as storytellers and researchers is sharing information.  Amazingly, we actually solved a mystery in the process.  Like any good mystery, the more we learned, the more we were left to wonder.

In Barrington, Illinois stood a grand, abandoned house known only as “The House on Rainbow Road.”  Why are some areas inherently more haunted than others.  Not far from here is Cuba Road, White Cemetery, a haunted bridge and even a phantom train that appears at a railroad crossing.  However, the fabled House on Rainbow Road seems to top them all.

Setting the scene for how the location looked when I first visited this location in the early 2000s, a long and narrow blacktop driveway, dotted with dead light bulbs lead the way to a small but steep hill.  To the right there was a silo, doghouse, chicken coops, and a barn.  To the left was only the footprint and wreckage of the house.  It had been burned as part of a firemen’s training exercise in the late ‘90s.

Something as distressing as it is mysterious about the location is that the second floor of the barn-like building, was always cluttered with baby toys.

When the house stood, it was large and modernist in architecture.  The most curious thing is that when the owners moved on, they did so in a hurry.  The closets still contained clothes and the kitchen drawers still held silverware.

“But is wasn’t just old toys either,” Stephanie Harlan, a friend I interviewed for my book, ” Voices from the Chicago Grave,” said, “there were also newer toys on the ground.”  It seems like, for whatever reason, additional toys have since been added to the mix since the original owners left.

“Then there was the basement of the house,” Stephanie continued.  “I was there with another friend who was poking around and just looking at everything and he asked if I had ever gone into the cellar.  I told him not to do it, because I had a bad feeling about it.”

Another friend of mine, Mike Pry, had an experience all of his own on the second story of the house.  He and some friends went to the property with the goal of keeping themselves occupied for the night and to confront their fears.

Her friend opened the cellar door, “and then all I heard is, ‘Oh, my God!’  There was a huge pentagram painted on the floor, red stuff on the walls, and there were half burnt candles and animal skulls all over the place.”  Stephanie did not stick around long enough to find out whether or not the red that was smeared on the walls was blood or paint.

They started at one end of the top hall and decided to look into each and every room just to be able to say that they did it.  They devised a plan to leave the door open after looking into it as reminder that that room had already been checked.

About half way through their mission they were interrupted.

“Someone whispered my name into my ear from behind me, and I figured it was just one of my friends being a jerk and trying to scare me.  Then I realized all my friends were in front of me and I was the last one in the line.”  Mike turned to see the source of the voice, but instead found that all of the doors that they had left open were now closed except for one – the door at the very end of the hallway.

When asked if they went back to the open door to look inside, Mike replied with a very realistic answer:  “No way, we got the hell out of there!”

For years, we only knew about the ghost stories and very little of the reality of this location until one day a contributor to WhatsYourGhostStory.com posted the link to a tiny article in a 1968 edition of the Chicago Tribune that reported the death of a young boy.

How exciting!  For the first time, we have the reports of a documented death on the property and it lines up with what people are seeing, as opposed to the other way around.  People had been randomly seeing a little boys ghost and not knowing why.  They were not visiting the location thinking, “a little boy died here.  Let’s see if we can make contact with his ghost.”

In 1968 William Cokenower III was seven years old when he was climbing on a birdbath.  He ended up pulling the heavy object on to his small frame, killing him.  William lived in the guesthouse with his family with his father serving as the groundskeeper.

One day a woman named Sherry Cokenower was doing research on her family history and stumbled across my web site when searching her departed brother’s name.  She had no idea that there’s a chance that her younger brother might still be inhabiting the area.  I would’ve understood if she was upset about learning this, but instead she was absolutely fascinated.  She then started to ask her dad questions.  The answers we got were ground-breaking.  In addition to sharing with her her conversation with her dad, she even loaned us the police reports and photos taken at the scene.  Her father verified that William had the same pajamas that people have seen this ghostly child wearing and that on the day of his death he was wearing a white shirt with blue overalls.  However, as a result of the accident, it was soaked with blood.

While this story is tragic and the details chilling, it’s absolutely amazing that, with the thanks to a community sharing information and a family that was willing to share some difficult memories, we have found the true history that confirms peoples’ paranormal accounts.