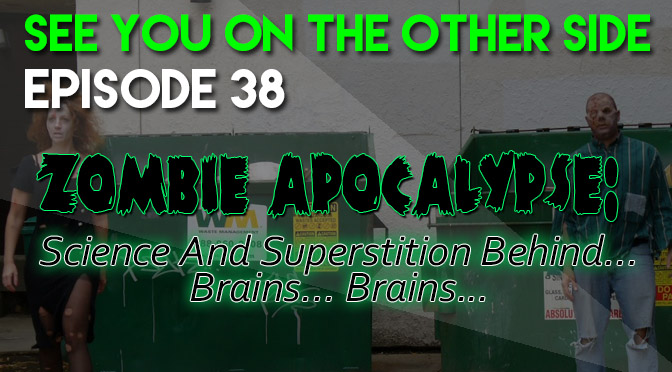 The Zombie Apocalypse. The past decade has seen the living dead explode like no other monster. Vampires had a kick for a little while and ghosts had their due after The Sixth Sense, but really, zombies have been the focus of a dozens of movies over the course of the past decade and at least two TV shows currently running (including cable’s most popular show, The Walking Dead.)

Mike has been obssessed with zombies since he was a little kid and he even mentions his traumatic first encounter with George Romero’s Night of the Living Dead (where he was tortured by his sister, frequent podcast contributor, Allison Jornlin of Milwaukee Ghosts), and that’s where the discussion begins, as should any discussion with impact of zombies on pop culture, because that film is really where our traditional idea of flesh-eating zombies comes from. Taking his inspiration from Richard Matheson’s brilliant I Am Legend adaptation, The Last Man on Earth (Vincent Price, not Will Forte) and also from the Arabic legend of the “ghoul” (flesh-eating djinn that hang around graveyards, sound familiar?), Romero created a new kind of shuffling terror, more dangerous in numbers than alone.

But the term “zombie” comes from Haitian voudou mythology and that leads to a discussion of the book,The Serpent and The Rainbow, which featured a much more traditional version of the walking dead. Where a bokor (voodoo sorcerer) would use a special zombie powder to turn its victim comatose to the point where people would think he was dead and bury him. Then later the body would be dug up and the man would be taken to a plantation to work as a slave for the bokor (or whoever he was doing the sorcery for.) The non-fiction book, The Serpent and The Rainbow, goes into detail about the world’s most famous zombie, Clairvius Narcisse, a man who died and was buried in 1962, but came back to his village very much not dead in 1980. The book is a more scientific look at the case and also the zombie powder (made from the toxins of a Caribbean puffer fish and a toad), while the movie was a completely fictional retelling, only using the idea of the researcher looking into the zombie powder as a launching-off point into magical horror (however, it’s a pretty sweet movie.)

With that, Mike and Wendy discuss fast zombies and zombie movie remakes for a little bit before getting into how a zombie apocalypse could really happen. First talking about toxoplasmosa gondii, which is a brain parasite that only grows in the stomach of cats. When it infects rats, it makes them run towards felines because it wants them to be eaten so that it can get into that cat belly! Terrifying that it can change rat behavior into something completely suicidal, but even more terrifying is that 50% of humans are already carrying the parasite. Could this be a reason that we domesticated cats and can it affect our behavior? Well the jury is still out because the science is controversial, but a link was found between the parasite and schizophrenia.

The conversation turns towards how even the Centers for Disease Control in Atlanta have been using the idea of a zombie epidemic to teach crisis preparedness, going so far as publishing a graphic novel about what people should do if a zombie apocalypse were to lurch its way through America. And then the talk finishes with how a television station that Mike used to work for, Newschannel 8 in La Crosse, Wisconsin, accidentally sent a warning out about the dead rising from the grave on its Emergency Broadcast System in 2013. Just how did that happen?

Watch The Night of the Living Dead online for free

“Based On A True Story: The Serpent And The Rainbow“, Cinema Suicide

“Return Of The Puppet Masters”, Corante, story about Toxoplasma gondii

Today’s Song is “I Was A Teenage Zombie” by Sunspot.

Hey now, the saw is family
Hey man, don’t you lose your head
It’s the Night before the Day after the Dawn of the Living Dead

I’m on the cover of Fango
I’m in the Grand Guignol
I’m a Famous Monsters late night picture show.