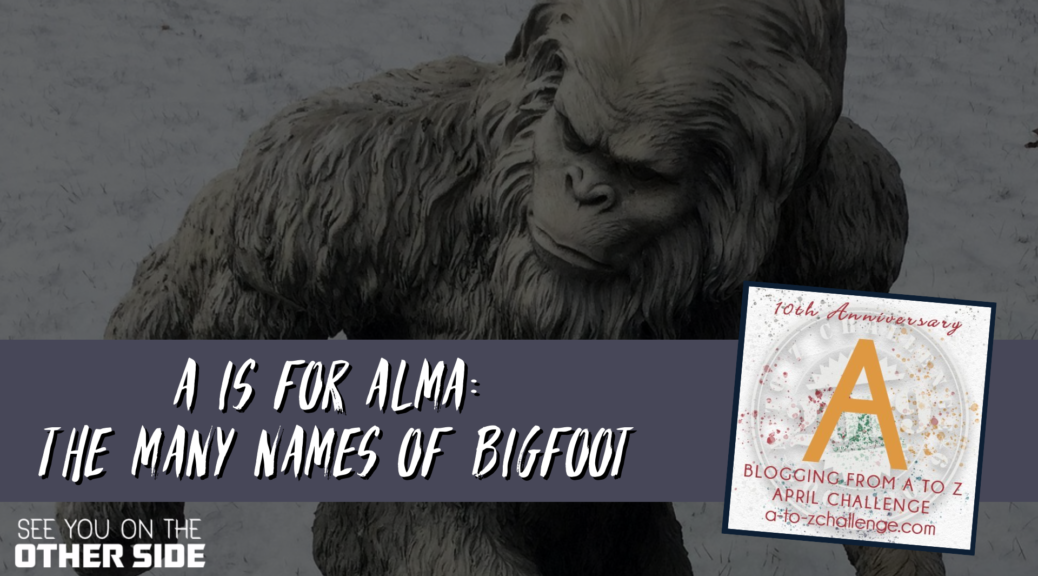 You would have to be some kind of hermit to not have heard of the creature known as “Bigfoot”. A giant, hairy hominid, this alleged large-footed biped is most popularly said to roam the forests of the Pacific Northwest. But, that isn’t the only place the elusive cryptid also called Sasquatch is purported to roam. Not surprisingly, sightings of a tall, hairy giant abound around the world and even pervade popculture. And, just as there are multiple names for half-seen, noncorporeal beings said to haunt the living, Bigfoot is known by many other names, some based on the region, and others tied to the theories as to just what this being or creature may truly be…

Almas—The Mongolian word for “wild man”, Alma, the Alma/Almas is said to inhabit the Caucasus and Pamir Mountains of Central Asia, and the Altai Mountains of western Mongolia.

Barmanou—also known as the Barmanu or Baddmanus, this creature comes from the mountainous region of western Pakistan and is described as a primate with human and ape characteristics.

Bagwajiwinini—while Sasquatch might be the most familiar NAtive American names for Bigfoot, it is only one of many. In Ojibwe, the big man is call Bagwajiwinini (bug-wo-gee-wih-nih-nih), meaning wild man/natural man, or Misaabe: a really large being. Searching online, one can find a number of Native American names—enough to fill up a list all by themselves.

Cain, Brother of Abel—in the 1800s, a Mormon farmer claimed that while riding into town on horseback, he was approached by a Bigfoot that simply walked along beside him and struck up a conversation, revealing itself as Cain, the brother of Abel, cursed to walk the Earth for eternity in punishment for the Biblical slaying of his brother.

E.T. (Extraterrestrial)—while there’s probably no accounts of a Bigfoot trying to phone home, there are multiple accounts of Bigfoots in and around areas at the same time as UFO sightings. Some reports describe Bigfoots fleeing from orbs, or driving them away. These accounts have led to theories that the big man is not of this Earth, or maybe even of this dimension.

The Fouke Monster—also known as the Boggy Creek monster, this cryptid was made famous in 1972 with the release of the movie “The Legend of Boggy Creek”, which puts the creature in Southern Arkansas.

Gigantopithecus—believed to have lived in Asia as recently as 100,000 years ago, this extinct primate closely resembles (skeletally) the famous cryptid described around the world.

Grassman—One of the most surprising places to have Bigfoot sightings is the very-developed state of Ohio, where the Grassman has been reported on multiple occasions.

Harry (Henderson)—Portrayed by the late Kevin Peter Hall (who was also the Predator in two films), Harry, as his adopted family called him, was the titular character of the popular 1987 film Harry and the Hendersons, in which a family strikes a Bigfoot with their car, thinks he’s dead, and takes the body home as a trophy, only to find the lovable creature was merely knocked out.

Mapinguari—hailing from South America, this elusive cryptid is believed by some to be another incarnation of Bigfoot, while others tie the name to an extant giant sloth.

Oh Mah—for the Hoopa Indians, the Oh Mah was the “Boss of the Woods”.

Orang-Mawas—a creature of Malaysian folklore, said to be 10 ft tall and covered in black fur, that feeds on fish and raids orchards. Also known as the Orang Dalam.

Patty—Made famous by the Patterson-Gimlin film of 1967, Patty received her name after it was determined the Bigfoot in the film was actually a female.

Roussimoff, André René—before he rose to international fame as the wrestler known as Andre the Giant, Andre Roussimoff also had a turn as “Bigfoot” in several episodes of the Six Million Dollar Man TV series in the 1970s. This particular Bigfoot was (in the show) not a cryptid, but a complicated android built by a marooned race of aliens who had crashed on Earth and used the cyborg to scare aware intruders from their hidden base. The character was so popular, Kenner added an action figure of it to their Bionic toyline.

Sasquatch—first used in 1920 by British Columbian school teacher J.W. Burns, this widely-known name for Bigfoot is based on the Halkomelem word sásq’ets, or “wild man.”

Skookum—among the Chinook of North America, there is the Skookum, or Evil Giant of the Woods.

Skunkape—the Myakka Skunkape, often simply referred to as the Skunkape, hails from Florida, North Carolina, and Arkansas, and gets its name from its appearance and the unpleasant odor reported to accompany it.

Woodwose—a lesser known, out-of-use name for Bigfoot in Europe was Woodwose, a common Middle English term, for a “hairy man”. In Old English, it was wudu-wāsa or wude-wāsa, which may mean an abandoned person or a forlorn person, and may come the German “Waise” and Dutch “wees” which both mean “orphan.”

Yeren—Chinese for Man-Monkey the Yeren is said to reside in the remote mountainous, forested regions of western Hubei.

Yeti—also known as the Abominable Snowman, the Yeti is hails from the region of Nepal and Tibet, and was popularized by explorers in the region in the nineteenth century.

Author’s Note: This list is by no means all-inclusive, but is an overview of some of the more common names of Bigfoot. Readers who want to share another name for Bigfoot are encouraged to leave it in the comments below. 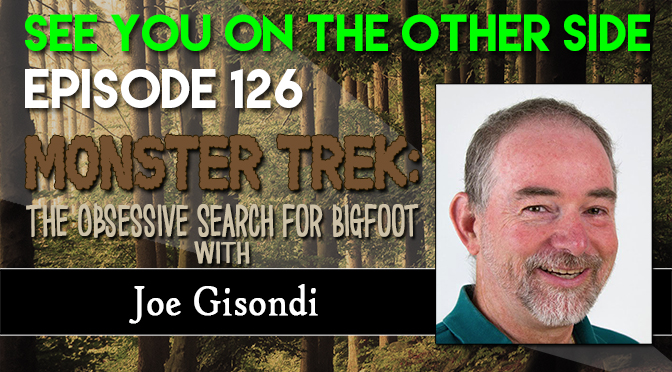 Joe Gisondi grew up in New Jersey reading the National Enquirer and from an early age. Before 1967, the tabloid focused on gory true crime stories, but in order to be stocked in newspaper checkout lines they changed their focus to celebrities, UFOs, and the occult. And the world was made better for it, because it inspired the paranormal bug in little Joe Gisondi.

Joe worked at different Florida newspapers for two decade, becoming an expert in sports news coverage, before settling down as a journalism professor at Eastern Illinois University in 2002. But he never lost that interest in the weird and wonderful and decided to write a book about the hunt for Bigfoot.

Joe’s take was not just writing about Bigfoot, but about the people who have upended their lives in hunting for the famous monster. What motivates someone to take months and years of their lives, go in the woods, and chase after a mythical (until it’s proven at least) beast? Especially when most other people just think you’re crazy.

That’s what Joe intended to find out. In the process of working on the book, he got to go on several expeditions himself and he might have had his own sasquatch encounter. We cover those expeditions, the weirdest thing he ever saw in Florida, and some of the regional differences in Bigfoot/Skunk Ape/Sasquatch lore in this interview.

You can pick up a copy of Monster Trek: The Obsessive Search for Bigfoot right here, like the book on Facebook, and learn more about Joe at this link. He’s got a weekly sports podcast and you can find Joe on Twitter at @MonsterTrekJG for Bigfoot and @joegisondi for sports media.

Obsession is something we often deal with on this podcast, and according to German Existentialist philosopher, Martin Heidegger, humans use these obsessions to distract ourselves to think about anything besides our impending mortality. Like Top Dollar says in The Crow, “Childhood’s over the moment you know you’re gonna die.”

Movies, sports, books, gardening, Bigfoot hunting,etc… we do almost anything to distract ourselves. To be (in Heidegger’s words) “authentic” we have to own each moment as it happens, accept our past, and accept that we will eventually become “non-being”. Bigfoot hunters own each moment through their quest into the unknown. This Sunspot song is accepting that life sucks sometimes (after all, we can’t always be out in the Woods looking for the Sasquatch!) but we can “own” each moment the best we can and in this particular song, “owning the moment through partying!”

Monday comes and Tuesday goes,
Dishes suck and laundry blows.
I’d love to tell my boss to kiss my a$$.
Wednesday’s here and then it’s gone,
My best friend’s passed out on the lawn,
And Thursday? $%^& Thursday!

Raise your glass to Friday,
When I can be all I can be,
I’m dying to party and I want a life that’s owned by me.

We only get one shot,
Somedays I don’t even wanna try.
Tonight’s our night to rock,
Life sucks, let’s live before we die.

My momma slaps me in my face,
My girlfriend puts me in my place,
Why didn’t anyone say it’d be this tough?
My minivan is in the shop,
Because I backed into a cop,
I’m flat broke, bored, and sitting on my duff.

As many times I’ve hurt my pride,
I just can’t stop this wicked side of me,
Because Mr. Hyde, that bastard, wants me back,
And I’ll get too inebriated,
Wake up again humiliated,
I’m just trying to have some fun,
Cut me some slack.

We only get one shot,
Somedays I don’t even wanna try.
Tonight’s our night to rock,
Life sucks, let’s live before we die.