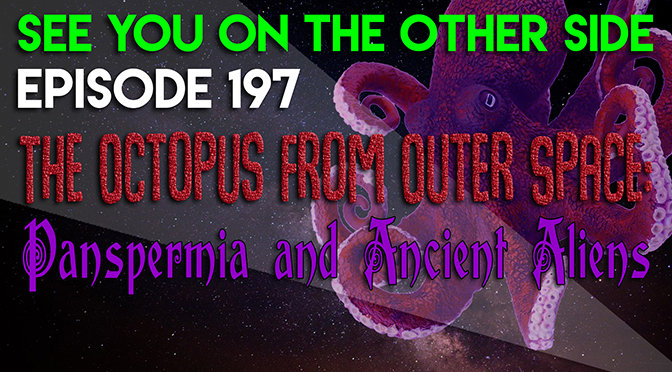 Our paranormal universe was all abuzz this week when a paper signed by 33 scientists called “The Cambrian Explosion: Terrestrial or Cosmic” suggested that not only the incredible biodiversity of life that burst forth in that ear was because Earth was being blitzed by massive clouds of organic molecules from space, but it presented the theory that the octopus might have come to Earth as frozen eggs cryopreserved in some celestial body that landed in the ocean.

Their specialties like camouflage flexible bodies appear suddenly in the evolutionary record 270 million years ago, so much so that scientists suggested that they were too advanced for the time they developed in. They suggest that it is a possibility that they developed on another planet and then some eggs somehow made it to earth.

They have personalities, can use tools, learn by watching others, treat humans that they know differently than humans that they don’t, and are generally considered the most intelligent of any of the invertebrates. Author Peter Godfrey-Smith wrote a book on those flex-y little buggers and said:

“If we can make contact with cephalopods as sentient beings, it is not because of a shared history, not because of kinship, but because evolution built minds twice over.”

So, how is that even possible? Space is a vacuum and it’s like, really frickin’ cold, man. Whenever I see it in movies, people can only last like 30 seconds out there before their head blows up or their eyes bug out. How would anything survive out there? Well, we can’t. But microbes and bacteria can. And there’s a microscopic creature called a tardigrade (or a water bear or also, a <barf> moss piglet) that can survive in a vacuum for up to 10 days and hibernate in the freeze and be revived after thirty years!

The theory that life on Earth might have come from outer space is called Panspermia which means “seeds everywhere”. Microbes picked up as asteroids bang into other planets and then crash into other planets, like ours. It’s a theory that was first suggested in the 1970s (and one of those proponents was also a signer on the recent “octopi from space” study) and it’s plausible. If microbes can live in space, maybe the building blocks of life on Earth crash-landed here a billion years ago to evolve into us.

Now, that idea doesn’t even sound that outrageous. It’s still just evolution, even if the original microbes that kicked it into full gear were from another planet, but Hollywood of course has moved that to the next level. Dozens of movies and TV shows now have posited that our evolution was directed by some extraterrestrial intelligence. From 2001: A Space Odyssey to Stargate to Prometheus to my personal favorite, Five Million Years To Earth, the idea that little green men have been messing with us has been around for decades. 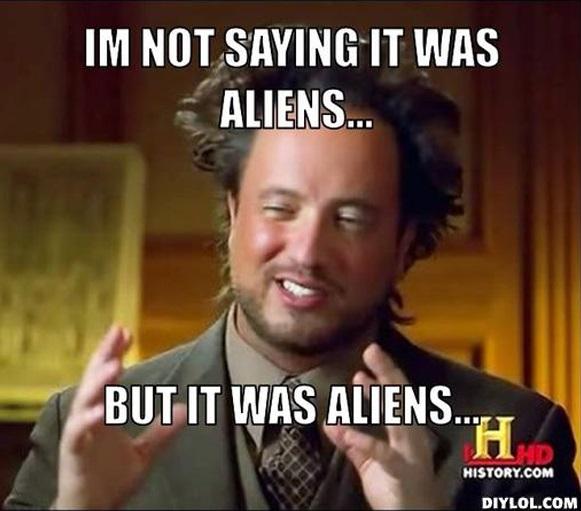 In this conversation, we cover:

In this episode we talk about the classic British serial Quatermass and the Pit that became the Hammer Horror classic film, Five Million Years to Earth, so for this episode we’re breaking out one of our oldest tracks. We recorded this track on our first trip to a recording studio all the way back in the mid-90s (which shows how long we’ve been writing songs with paranormal influences!)  Here is Sunspot with the very rare track (only on our original demotape!), “Bleed Me Free”!

I’ve got a dirty little secret,
I’m hiding right inside your purse.
I am falling down a deep pit,
Five million years to earth.
I know that it’s not easy for you,
But don’t think that you’re easy on me.
One thousand years in Purgatory,
Might help me bleed it out.

I’m in a brain-dead nightmare,
Living both sides of a split-screen.
I’ve washed my hands over and over,
But they are still not clean.
I lost equilibrium,
Between purity and vice.
One thousand fishhooks in my eyes,
might help me bleed it out.

Humours out of balance,
A tortured sanguine frenzy.
Pain is just another addiction,
It can never bleed me free.
Joined at the hip with a psychopath,
Looking in from another reality.
I gave myself a lobotomy,
But only the truth can bleed me free.

I know that it’s not easy for you,
But don’t think that you’re easy on me.
One thousand years in Purgatory,
Might help me bleed it out. 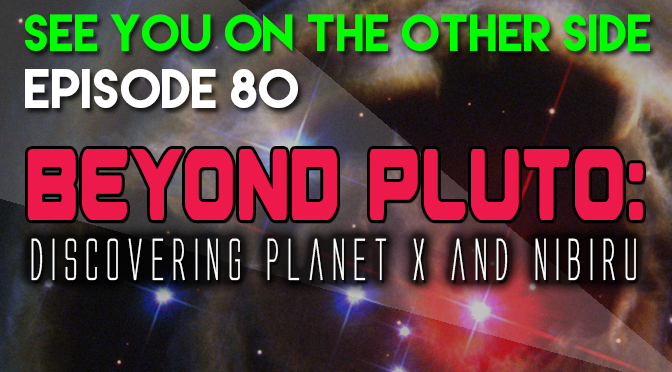 I’m normally the type of person who is willing to entertain alternative philosophies, fringe conspiracy theories, and what the straights would call “wacky ideas”, but I’ll be honest here when I’m saying that I have always been particularly prejudiced against certain paranormal concepts.

There are just some that I find too ridiculous, or pointless, or lacking in any kind of scientific evidence whatsoever… I’m sure we’ll be tackling a number of these over time on the See You On The Other Side podcast and this week we tackle a topic I’ve always thought was a complete waste of time, Planet X.

Planet X, or Nibiru, is the theory that there is a mysterious planet that’s lurking out on the far side of the solar system beyond Pluto. There have been various wild speculations over the years that this planet is either home to an alien race that has messed with the people of Earth every time it comes near us in orbit or that the planet itself was going to crash into us. Mind you, these weren’t astronomers, so that’s where they lost me. How can the people with access to the most advanced space observing technology in the world miss the fact that there’s a tenth planet out there?

Now I like the fact that the X in Planet X can stand for the undiscovered mystery of it (like an X variable in Algebra) as well as being the Roman numeral for 10, so it’s double clever.

Or well, it was double clever until they demoted Pluto from full planet to a dwarf planet, so there’s no longer nine official planets in the Solar System. In this week’s podcast, the humiliation of Pluto becomes a recurring theme as we portray the scientist who helped make that happen, Caltech Astronomer Mike Brown as an angry Scotsman who is constantly berating Pluto for its “wee” size. To be clear, Mike Brown is not an angry Scotsman, but since his Twitter handle is @plutokiller, I’m pretty sure he’s down with berating innocent tiny planets.

Anyway, Mike Brown is one of the reasons that we’re talking about Planet X today. He was a big part of a research paper published in January 2016 that there is probably a Neptune-sized planet beyond Pluto that we haven’t discovered yet after all.

Funny enough, the term Planet X was used when they first started looking for a planet beyond Neptune in the late 19th Century. And in fact, the man who made it his life’s mission to discover that planet, Percival Lowell, was a firm believer in intelligent life on Mars. Lowell’s observatory in Arizona did eventually discover Pluto, so he was right about something.

Maybe I was wrong to dismiss Planet X my entire life. It looks like there might be another planet out there, could it possibly be related to the Nibiru that Nancy Lieder and Zechariah Sitchin talked about on Coast To Coast AM for most of the late 90s and early 00s?

First of all, let’s talk about how to pronounce Nibiru, when we did our show on David Icke and the Annunaki, I didn’t research how to pronounce his name properly and went on to say it as “icky” (rhymes with sticky) during the whole episode. Sorry about that, David, when your last name is Huberty embarrassing rhymes just come naturally.

So, what is Nibiru all about? Well, let’s start with Zechariah Sitchin who was a Russian-born English-educated journalist that lived in Israel for most of his life. He could read Ancient Sumerian, which is no small feat, and his study of their ancient texts had lead him to believe that there is an extra planet in the Solar System known as Nibiru.

He said that his research showed that this extra planet has an orbit that puts it near Earth every 3600 years and that on that planet lived the Annunaki, the Sumerian Gods who granted humanity civilization. His book was called The Twelfth Planet because he says the Sumerians added the Sun and the Moon when they talked about their heavenly bodies, so the last planet in the sequence was actually Nibiru and they considered it the twelfth. If this all sounds a little Stargate to you, it’s because the creators actually admitted to being influenced by some of his ideas.

That’s not the only time, however, that the idea of the “Tenth Planet” has been used in fiction. Doctor Who’s second greatest villain (behind the Daleks of course) are the Cybermen, who originally came from Earth’s twin planet, known as Mondas. A natural disaster sent Mondas spinning off to another part of the universe In their introductory episode, they actually fly their planet back into the Solar System to take over the Earth. This is why I hope that if another planet in the Solar System is found that we need to call it Mondas.

I don’t think that Icke’s Annunaki and Sitchin’s Annunaki are quite the same breed of evil alien, but they both have had their hands in human evolution. Expounding upon Sitchin’s work in the 90s during the run-up to Hale-Bopp’s appearance though, comes a woman (originally from Wisconsin of course, because we breed weird) named Nancy Lieder.

Lieder claims to have been contacted by aliens from Zeta Reticuli (the Zetas, which sounds more like a frat than a super-advanced race) and they warned her about something called the Nibiru Cataclysm. Nancy is a channeler who has been talking to the Greys from Zeta Reticuli for a couple of decades now and has her own website, ZetaTalk (which of course, makes me immediately think of Linda Richman and Coffee Talk.)

She said that the tenth planet was coming towards Earth and it was going to cause a global cataclysm, the North Pole and the South Pole were going to shift locations, and all Hell was going to break loose.

However, in another disappointing round of apocalypses that never happened, she kept on moving the date of the actual cataclysm further and further as they kept on not happening. People even thought that December 21st, 2012 was going to be the big day but like Y2K and Harold Camping, nothing ever came of it.

But Nancy continues to operate her website and bring the wisdom of the Zetas to us Earthlings and as recently as this month, she has chats where she takes people’s questions and brings them to our alien friends.

This isn’t really on topic, but while we were discussing the Reptilians, Greys, and Annunaki this episode, my sister Allison from Milwaukee Ghosts alerted Wendy Lynn and I to the existence of the Nordic aliens from the Pleiades. Obviously, we’ll have to research them more, but they’re described as very friendly, almost magical, and hyper-attractive types that come out of cigar-shaped UFOs, but look more like they should be in an IKEA catalog.

Anyway, that was truly a delight to learn about the alien race that would look awesome on the side of a van. Speaking of driving, this week’s song is “Cemetery Highway” by Sunspot – it’s a song about how we’re always looking to the skies and being obsessed with the end of the world like 2012 or the Nibiru Cataclysm, and it’s just a way to confront our own mortality. After all, as Chuck Palahniuk said, “On a long enough time line, the survival rate for everyone drops to zero.”

Here’s a live version of the track from our rock opera, Major Arcana.