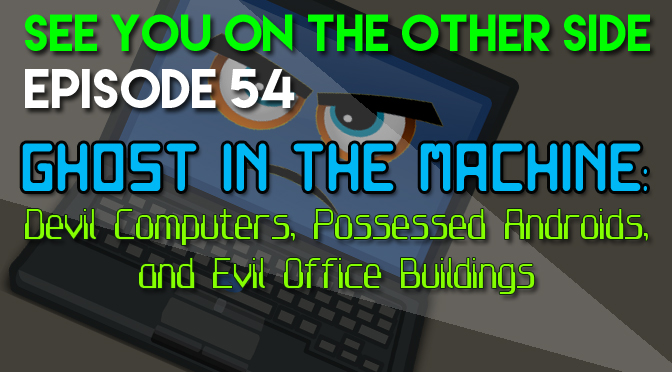 We’ve had discussions about Artificial Intelligence before from Skynet from The Terminator to whatever The Matrix ended up being, the idea that something that we develop will eventually become intelligent and want to destroy us is now a common theme. But there’s another kind of machine that has it out for mankind and that’s one that’s either misguided, possessed, or just has an inherent hate of us. AI, Schmai-I, we’re talking EVIL COMPUTERS!

When I think of a computer trying to kill me, I first think of two particular mean machines. Number one is always going to be HAL 9000 from 2001: A Space Odyssey. He’s not technically evil, he just got conflicting instructions. But I worked in software testing for several  years and one of the first things that I always thought about was to check for what happens when you give the software commands that might conflict with each other. What happens if you confuse the program?  Does it try to suffocate you and your crewmates all the while responding to your questions in a calm voice that sounds like a psychotic easy listening deejay? If it does, write a bug report, you think NASA could have paid for some quality assurance…

Number two for me, is the King of Siam himself, Yul Brynner as “The Gunslinger” in Westworld. If you haven’t seen the original, it’s a classic.  Michael Crichton wrote and directed it back in the 70s and it’s basically Jurassic Park with robot cowboys instead of dinosaurs. Some kind of virus “infects” the androids in the amusement park and they start killing people. Everything shuts down and killer machines are on the loose, instead of the T-Rex, you get Pharaoh from The Ten Commandments

“A movie with everything and Yul Brynner…”

There has been a ton of warnings lately in the news from scientists who are warning us that Artificial Intelligence will one day turn on humanity and kill us all. Even Stephen Hawking, and he needs computers to talk! Well, another boffin, Jerry Kaplan from Stanford University, has said that computers are going to be just too different from us to start becoming so intelligent that they just start getting upset about being held captive by humans and decide to rise up and kill us. In his words,

But it’s not going to activate one morning and say, “What a fool I’ve been! I really want to be a violinist, and play the great concert halls of Europe!

My point is that machines are not people.  They don’t have independent aspirations and desires, only those that derive from the goals we set for them.

It’s a nice reassuring interview that makes me hope we won’t be bowing to our new robot overlords anytime soon. You know what doesn’t reassure me? Wendy’s new Amazon Echo. It’s in her house and she talks to it like a person and asks her new “friend”, Alexa, questions.

Alexa is kind of like Siri on the iPhone and it’s similar to having  the computer from Star Trek in your living room. We play with Wendy’s in the podcast and you can hear for real what the future sounds like. It hasn’t tried anything violent yet, but we warned Wendy about it, we warned her good.

There are so many movies and TV shows that use evil computers as a plot device. Doctor Who has WOTAN (a sentient computer that’s trying to destroy the world and in a production mistake actually calls the Doctor, “Doctor Who” so it’s confusing too!) There was an actual movie, Ghost In The Machine, which was kinda terrible, so don’t bother. X-Files had a great episode (once again called “Ghost In The Machine”) where an office building tries to kill its inhabitants (and if you’ve ever worked in an office building, do you really doubt the veracity of that one?)

One of the nastiest is a movie from the 70s called Demon Seed, where a computer  tries to impregnate poor Julie Christine. But it’s a great example of a “smart home”, though. So if you have a Nest thermometer or those Hue computer-controlled lights, I think you’re going to love this film.

And there’s a ton more good ones, from Edgar in Electric Dreams to the Master Control Program in Tron, Joshua in Wargames, and the Red Queen from the Resident Evil series. We try to hit as many as we can (I also heartily recommend Dan Simmons’ Hyperion Cantos, but I won’t give any spoilers away!)

We also talk about The Machines of Loving Grace, a poem by Richard Brautigan from the 60s, which is about how one day we’ll all return to a oneness with nature because we’ll have developed machines to take care of all the difficult parts of a living. It’s a hippy dippy fantasy, but it’s also kind of nice. While the ensuing decades talked about the nightmares that evil computers can bring us, sometimes it’s good to think that there was a time when people believed the world might not be all just going to Hell. That there was some hope. If we can avoid those pesky evil computers (and when I worked in tech support I used to have to face those bastards head on), maybe we can start thinking that way again.

The song for this episode is “The Internet of Evil Things” by Sunspot.

I am inside your pocket,
Where I can pull your strings,
Because I’m everywhere,
The Internet of evil things

You gave us all the brains but failed to give us hearts.