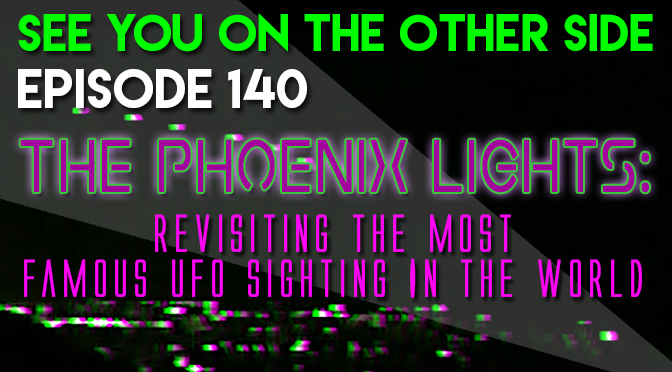 With the new film, The Phoenix Forgotten coming out this weekend, we thought it was the right time to reconsider The Phoenix Lights. On March 13th, 1997, an estimated ten thousand people saw a UFO over the Phoenix skyline.

The new movie is a found-footage Blair Witch-style film produced by sci-fi movie favorite, Ridley Scott, that takes the plot of three teenagers who were witnesses to the phenomenon, go out in the mountains to investigate it, and then disappear. The idea is that they bring along a video camera (no camera phones or YouTube in 1997!) and the videotape is later discovered.

So, cool premise for a film, but what did people actually see on that Thursday night in 1997? Well, the original sighting began in Henderson, Nevada, a town right outside Las Vegas. That report was of a V-shaped object that had six lights at the leading edge and it was traveling southeast. It was then reported in several towns between Henderson and Phoenix, with Phoenix being the place where it was reported the most.

Also, people were reporting two different kinds of events as well. One was the boomerang type spacecraft that would eventually be what the Phoenix Lights is most known for. They said that it blocked out the stars as it passed overhead, with some people claiming that it was nearly a mile across (while the original Henderson, Nevada sighting claimed to only be the size of 747.) These were primarily reported in Prescott, Arizona but no known footage was taken of it there. Later in June of that year, *USA Today *would run a photo on its front page reporting the story, and that computer-generated recreation of the sighting would become the most famous image associated with the phenomenon. 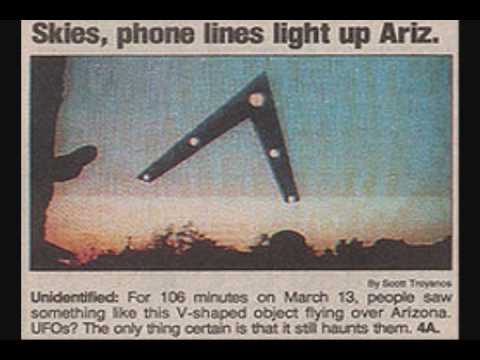 The second event was a set of nine lights that appeared to hover over the city at 10pm and that’s what’s been covered the most because of the famous video footage that was taken that night. The lights seemed to disappear behind a mountain range and no explanation was given.

The governor of Arizona, Fife Symington III, even talked about the lights in a press conference not too long after. He said that they “found the culprit” and brought out a cabinet member in an alien costume as a joke. The authorities didn’t treat it seriously, even while thousands of people reported the sighting and the story ended up being picked up by the national news networks in July, after the USA Today story ran.

The lack of immediate response from the government allowed for people to start speculating themselves and Dr. Lynne Katei has become the most famous investigator into the phenomenon. She connects it to earlier UFO sightings in the area as well as a missing time experience that she had with her husband and wrote a book and released a documentary on the Phoenix Lights.

Since the initial sightings, debunkers have claimed that the first event was merely the Maryland Air National Guard in the are running winter exercises, and the second was the flares that they dropped as part of those exercises. Who knows why they decided not to tell everyone at the time? Since air traffic control records are usually cleared every two weeks if there’s no incident, there’s no hard copy to verify the claim. Only the word of government sources. But the lights were on the news that night, why did they wait?

Governor Fife Symington III, who originally made fun of the event in 1997, has an explanation. He didn’t want to panic the fine people of Arizona and he was afraid if they took the event too seriously, that’s what would have happened. In fact, he now claims that he saw the boomerang shaped UFO over Phoenix that night as well and that the investigation should be re-opened. He even called it “otherworldly”, so why did he change his tune ten years later?

There hasn’t been an explanation yet that satisfied all the people who witnessed The Phoenix Lights, so the mystery endures twenty years later.

Number one, they did an anonymous report to MUFON of a 60-year old man who claims to have seen an alien the night of the lights. This was later picked up by Cryptozoology News and reported on as a news story as well as someone reading the report into YouTube over footage from the real Phoenix Lights. Then, the director of the film does interviews claiming that his film is telling the truth with tying into a “missing persons” case from that night. They try to tie the false missing persons case to the Heaven’s Gate cult as well to further exploit the “real-life connections”.

It’s a pretty clever way to get attention for your film, but at the same time it’s damaging to the field of UFOlogy (just take this forum post from Above Top Secret for proof of people missing the fictional aspect of it) and it’s another case where they’re capitalizing on innocent people’s beliefs and natural curiosity in an event witnessed by thousands, just so that they can try to sell more tickets (I have this same issue with Tom DeLonge’s book, Sekret Machines saying that it’s fact masquerading as fiction.)

When you’re dealing with the paranormal, the lines between reality and fantasy are already blurred and mixing them further to make a little money might be good marketing but it’s bad humanity. Whether you believe in extraterrestrials or not, any time you mess with the truth for personal gain fouls it up for the rest of us.

This week’s Sunspot track takes a different tack on what the UFO was doing flying over Phoenix. Unlike The Phoenix Forgotten or The Phoenix Incident, maybe these aliens just came to Las Vegas to have a good time on a little St. Patrick’s getaway, partied too hard (because that can happen to anyone in that town), and got lost on the way home. Just saying that maybe they didn’t mean any harm, they just don’t get the same kind of fun on their homeworld. Anyway, take a listen to “The Ballad of The Phoenix Lights”.

They came down to Sin City,
For a St. Patty’s Day party
But things were far from pretty,
they started drinking too early.

They hailed from a world that was dry,
a real cosmic bore.
These boys just wanted to get high,
and maybe even score.

So they hid their ship and hit the strip,
didn’t miss a casino,
And they left a trail of wreckage
from the Luxor to the Flamingo.

Their foreign livers couldn’t process,
All the booze they did consume,
and the MIBs said they had to leave,
before they trashed their hotel room.

They stumbled back to their ship
grabbed the wheel with one eye closed,
But they took off way too fast,
and then got lost on the way home.

They thought they set the course for their world
and went southeast instead,
the driver said that he was fine,
but he was messed out of his head.

When they finally got to Phoenix,
well, it made quite a scene,
Ten thousand people saw their lights,
they knew it couldn’t be a dream.

Mericopa County had a Sheriff Joe
he saw the craft with his own eyes,
he knew he had to pull them down
Intergalactic DUI.

He tracked them down by the mountain range,
And they didn’t try to run,
‘License and registration’ he said
’You boys have had your fun.

You see this rock ain’t for aliens,
specially trouble like y’all,
This planet’s for humans only
I’m gonna kick you off our ball.’

The driver cried almond eye tears,
and Joe felt a touch of mercy,
Maybe I shouldn’t be so tough,
Maybe these things are just like me.

So he didn’t blast them back to space,
So they didn’t have to run.
And now they’re being poked and prodded,
in Area 51!