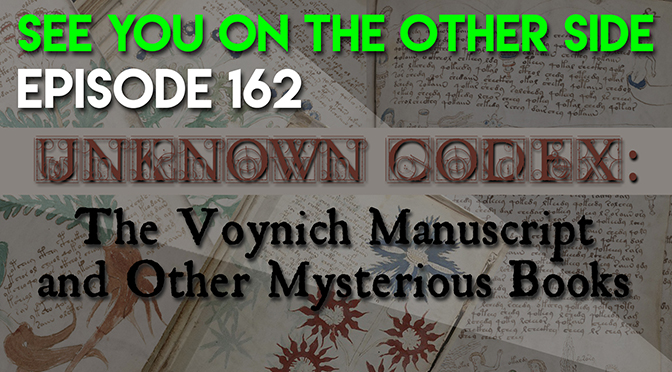 There’s nothing quite as sexy as a good mystery. Sometimes the game is figuring out clues left by an artist to discover a hidden clue to their true intent (just look at the Twin Peaks online discussion fury that was happening all summer), sometimes the game is understanding what a mainly symbolic work is actually trying to say (look at Jennifer Lawrence and Darren Aaronofsky’s new film mother! and how its strange Biblical metaphor is alienating audiences looking for a straightforward horror film), and sometimes it’s just about figuring it out what words are said in the first place.

The Voynich Manuscript has been called the most mysterious book in the world. Two-hundred forty pages of undecipherable language, pictures of plants, constellations, and naked women… it almost looks like a high school stoner’s notebook, all it’s missing is a crude #2 pencil rendition of the Dark Side of the Moon album cover. But what does it say? What does it mean? Is it a magical spellbook (there seems to be a recipe section)? Is it about finding the fountain of youth? One researcher in the 1970s claims that it contains the secret to the elixir of life…

Brought to the United States by Polish-American (yeah, just like me!) book trader  Wilfrid Voynich in 1912, it was said to have been bought by Holy Roman Emperor Rudolf II in the 16th Century who was interested in old books that might turn his depressive moods around. By that era, it was already an old book and it was claimed to have been written by 13th Century English monk and “wizard”, Francis Bacon (who is famous for having a “brazen head”, which was an automaton made of bronze or brass that would answer people’s questions like a Medieval Magic 8-Ball.)

To make it even more mysterious, it was thought that Rudolf II bought the book from Elizabethan astrologer John Dee and his companion Edward Kelley. Dee was a mystic who spent decades of his life trying to talk to angels and Kelley was a spirit medium who would sometimes receive supernatural instructions to do a wife swap with his friends (hey, you’re not going to turn down a request from the Angel Uriel, are you?!)

So, the book has a definite paranormal pedigree. People have spent the past hundred years trying to figure out just what the Voynich Manuscript might mean. It was donated to Yale in the 1960s after someone bought it from the estate of Voynich’s widow and you can see the whole thing online because they’ve digitized the whole thing!

Since people have been studying this mystery for the past hundred years, everyone was surprised when the prestigious Times Literary Supplement in the UK published an article saying that the Voynich Manuscript had been “solved” and it was just a medieval women’s health manual using Latin abbreviations instead of words. Hey, of course gynecological well-being is extraordinarily important and we’re 100% behind that, but let’s be honest, we were hoping for something a little more, well, mystical… (or at least a well-made hoax!)

Of course, the fine people of the Internet disagreed with Nicholas Gibbs’ conclusions on the manuscript almost as soon as he released them, but while we might never know the truth, it seemed like a reasonable explanation for such a strange text. At least for about five minutes anyway…

After we discuss some other famous mysterious books like the Codex Gigas (also known as The Devil’s Bible), a 17th Century letter “from a nun possessed by the Devil” that was recently deciphered, the Gospel of Mary, and the awesome treasure hunter’s code of the Beale Papers

And we’d be remiss if we didn’t mention some of our other favorite mysterious texts from the land of fiction.  Necronomicon Ex-Mortis of Sam Raimi’s Evil Dead series to the Darkhold of Agents of SHIELD, mystical books capture our imagination in stories as well as real-life mysteries. The most famous is H.P. Lovecraft’s Necronomicon (which, in a story by Colin Wilson, actually was the Voynich Manuscript.) Lovecraft himself never fully created the text of his purely fictional book, but fans decided to make a version in the 1960s and sell it in bookstores, which lead to decades of kids thinking that Lovecraft’s evil book of the Old Ones transcribed by the Mad Arab Abdul Alhazred was an actual book and not just created out of whole cloth by the weird fiction master.

But in the end, all of these Medieval mysterious texts had to be copied by hand, a long and arduous process that could take years. Not that many people could read because there weren’t that many books! Before the printing press, the only way to disseminate written knowledge was manually and the copying would often be imperfect. That’s the idea of this week’s song, when you just make a copy, there’s something missing, and when you make a copy of a copy, it’s even worse (see the Michael Keaton/Harold Ramis underrated comedy, Multiplicity, for more!)

Whatever happened to your passion,
and all the pretty things that you used to believe in?
Was it worth trading your soul in,
for a vampire bite and a lump of coal?

I heard all the junior high school cheerleaders had a crush on you,
I know because I read it on your FAQ,
and all the small town boys were chomping at the bit,
a rose by any other name smells just like $&@#.

Did you get your piece of the action,
Your pot of gold and an ice cream cone?
Did my death give you satisfaction,
I saw you paint my picture on an old tombstone, yeah.

I heard all the neighbors’ kids,
were in love with you/
I know because I read it on your FAQ,
and I tried for so long to put my finger on it,
a rose by any other name smells just like $&@#.

Are you real,
or just a carbon copy?
A bloodless rose has a heartless body,
And you feel,
just like a carbon copy,
you’re paper thin of who you used to be.

I heard all the high school cheerleaders were in love with you,
I know because I read it on your FAQ,
and all the small town boys were chomping at the bit,
a rose by any other name smells just like $&@#.

Are you just a carbon copy?
A rose by any other name,
smells like shit just the same.