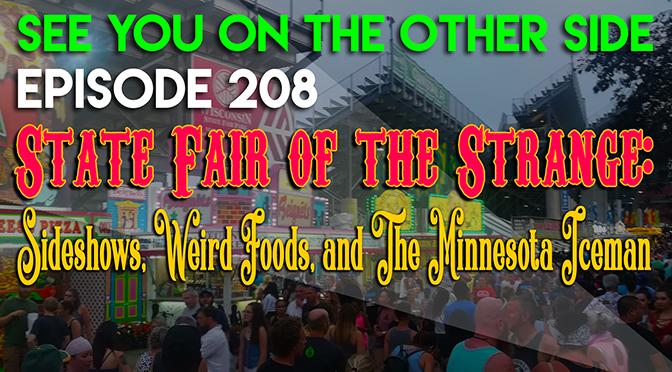 We’ve been regular performers at the Wisconsin State Fair for the last eight years and have grown to love the goofy mix of agricultural excellence, carny spectacle, and sheer gluttony that comes with the celebration of all things Wisconsin. They even have a complete list of all the foods “on a stick” that you can enjoy.

And the thing is, many of the things to do at the State Fair are innocent and fun, I mean just look at the intro to Rogers & Hammerstein’s State Fair musical (that Wendy still can remember all the words to!)

But the State Fair has always had a lot of weirdness to it. First of all, it’s a place where people make giant things just for the Hell of it. In Wisconsin, we just made the world’s largest cream puff that’s three and a half feet long and weighs over 125 pounds. Why? Why the Hell not?!

But it’s also the longtime home of the sideshow, there used to be over a hundred traveling sideshows touring American State Fairs in the 1950s and 60s and there even was a town where the sideshow performers lived during the Winter (Gibtown, Florida, where The X-Files got the inspiration for their Season 2 classic, “Humbug”.)

The sideshows were still around when I went to the fair as a kid, but you’re not going to find shows that feature genetic abnormalities anymore. Some states have passed laws against exploring people with deformities and even though sideshows may not have been as exploitative as we think, there’s still an icky aftertaste in gawking at other human beings that we feel today. (At least in person, here’s a great article from Variety that compares modern reality TV to the old-time sideshow and well… see if you can tell the difference.)

But one of the traveling exhibits that I wished I would have seen as a kid is  the “Minnesota Iceman”. Was it the corpse of the famous “Missing Link” that traveled the country? Was it the last living Neanderthal?

Well, there’s lots of conflicting stories when it comes to the Iceman and we go over them in the episode. The FBI and the Smithsonian even get involved.  Wendy and I finally saw him in March when we were down at SXSW and made a visit to The Museum of the Weird in Austin. You can hear our verdict in the podcast.

In this episode you’ll: