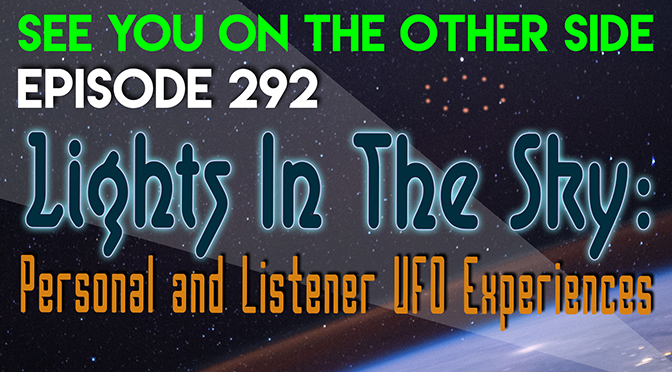 Millions of people have UFO stories. There is a one-hundred percent chance that you know at least one person that has a story! So, we went to our listeners and in our own archives for this episode’s tales of UFO experiences.

Once again, join me, Wendy Lynn, Scott Markus from WhatsYourGhostStory.com, and my sister Allison Jornlin from MilwaukeeGhosts.com to talk about our own stories as well as great ones from our listeners. You can watch the unedited livestream of our conversation here if you’d like to see our pretty faces while we talk.

My sister, Allison, has her own UFO story and it happened to be on the day that my daughter was born, September of 2016. Here’s the exact text of the email she sent me and it came out about 15 minutes after the birth, she didn’t know about it yet and I didn’t have much time to think about it at the time!

I saw some UFOs today at about 7:25 a.m. and I couldn’t wait to tell you. Maybe it’s a sign. Is it baby time? Below is what I wrote for the kids today during our Quick Write: Something amazing happened to me this morning.

No, my brother’s baby didn’t come yet, unfortunately. It was something else.

I was driving to school on Hwy 43 Southbound when I saw something strange in the sky. Actually it was two-somethings. I wondered were they planes, but I couldn’t stop and look because I was on the expressway. That means emergency stopping only!

The objects were pretty high up. That’s why I thought they were planes. But I actually saw two planes go by this morning also. These other objects didn’t seem to be moving and they didn’t have the blinking lights that planes have to have by law. They were like two groups of three bright, white lights hovering there. One was much lower than the other and off to the right. What were they? I wish I could have stopped and taken some video. By the time I got off the expressway, the lights were in back of me and seemed to be getting smaller.

I think maybe they were flares, but I’m not sure. They seemed to fade out instead of coming down like they were on parachutes. They also didn’t really seem to move at all, just hanging motionless in the sky for at least 5 minutes. What do you think they were?

I’ve got my own UFO story too, not exciting like an abduction or anything, but interesting enough to me that I wrote it down the same day.

I was on a vacation in January of 2008 visiting a place called Cabo Rojo which is an incredible white sand beach on the southwestern shore of the island, opening up to the Carribbean sea with a very famous lighthouse.

There was an object far away in the sky that almost looked like a blimp, but it was tremendously high in the sky, so high and so far away that we couldn’t be quite sure of what it was. It definitely didn’t look like a cloud, even though it was completely white and high enough to be a cloud. But the rest of the clouds had some kind of softness and transparency to them and this cloud didn’t. It was definitely unusual and I thought it might be a UFO, what I really thought it might have been was some kind of alien or government ship that was up there and it was meant to be disguised as a cloud, but it was just different enough so if you looked you couldn’t tell. I dunno, I wanted to take a picture of it but I was so enamored with the natural beauty of the place that I forgot about the unnatural beauty of what we were seeing. It probably was a cloud or a blimp that was very high, but it looked just different enough from the other clouds to be interesting.

Funny enough, as we were getting back on the road and driving towards our next location, just what road do we end up driving on? Yeah, that’s some kind of synchronicity. I see something weird in the sky I can’t explain on the same day we randomly decide to drive Puerto Rico’s Extraterrestrial Highway.

This episode is chock full of weird lights in the sky stories, including:

Well, something I said in this episode is that I’m gonna punch the next person that says the phrase “Space Brothers” to me, well guess what, it was me. The most ridiculous UFO hunt I’ve ever been on was at the Michigan Paracon in 2017 where we all stood outside in the parking lot while Andrea Perron sang “Sentimental Journey” and it was as ridiculous as it sounds. The only reason I took it even a little seriously at first is because Dave Schrader from Darkness Radio and The Holzer Files and Amy Bruni from Kindred Spirits both said that Andrea could really make some crazy stuff happen. Well, I don’t know what they were smoking, but here’s our immediate reaction afterwards…

Okay, so obviously it was hard to take that seriously, so for this episode’s song, we decided to ask our alien friends for a favor. Here’s our Sunspot paranormal track of the week, “Space Brothers”.

You must be talking at light speed
from that black hole you got on your face
cuz when you open your mouth, time slows, and
and I just want to escape.

Oh, you piss me off on a cosmic scale,
So I don’t want ET to come in peace,
the first thing he should do is abduct you, and get you off this planet for keeps.

I dunno why spacemen love butts.
Who can read their alien brains?
But if they’re looking for the biggest asshole in the world
well, I can give them a name.