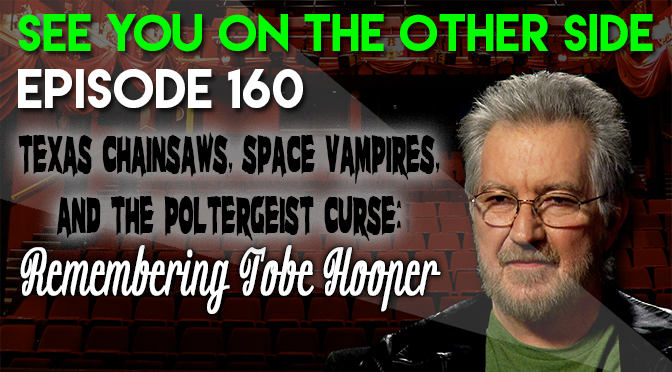 Filmmaker Tobe Hooper passed away on August 26th, 2017 at the age of 74. Hooper was most famous for being the director on The Texas Chainsaw Massacre and Poltergeist, but he also set his indelible mark on great films like Salem’s Lot and (the extremely under appreciated, in my opinion) Lifeforce. While he’ll always be remembered for having a massive impact on the the horror genre with his first big film, his other works have had real life paranormal urban legends and inspirations behind them. Allison from Milwaukee Ghosts, Wendy, and I talk about they recent Mothman investigations (Allison in Chicago and Wendy just went to Point Pleasant, West Virginia) and then we get right into our favorite Tobe Hooper movies.

First of all, we discuss the marketing behind The Texas Chainsaw Massacre, because the original tagline said that it was based on true events – which is completely not true! Of course, that kind of marketing helps sell tickets and makes something even scarier (just think about The Conjuring as a modern example). That little bit of brilliance helped Tobe Hooper turn his $300,000 independent Austin, Texas movie turn into a 146 million dollar (adjusted for inflation) horror juggernaut that inspired sequels, remakes, and even launched the careers of Matthew McConaughey and Renee Zellweger.

But Leatherface was inspired by our own America’s Dairlyand homegrown Psycho, Ed Gein, who created his own masks of human skin from corpses he’d dig up in the Plainfield, Wisconsin graveyard. Ed died in Wendy and my town of Madison, but Allison has a fun story about her college poetry professor who used to volunteer at socials at the Mendota Mental Health Institute here and even got to dance with Ed himself (who was prone to dementia and considered good natured in his old age.) That was about as far as the “Based on a true story”, Tobe Hooper’s Texas Chainsaw Massacre got. Silence of the Lambs, Psycho, and a little known Roddy McDowell film called It! were also inspired by Ed Gein.

Tobe Hooper made a huge impact on the cultural zeitgeist with his adaptation of Stephen King’s Salem’s Lot for television and 11 years before kids were traumatized by IT, it was vampires in Maine that gave them nightmares.

But then Tobe Hooper hit Hollywood pay dirt by scoring the directing gig for Poltergeist. While there was a controversy that Steven Spielberg might have been the real director, our interest comes from the curse that supposedly followed the actors involved with the production.

The story of the Poltergeist curse has been around for at least 20 years and it involves the fact that the two of the actresses died very young, Dominique Dunne was murdered by her boyfriend and Heather O’Rourke (the girl that says “They’re here”) died of bowel obstruction complications during the filming of Poltergeist III.

Plenty of stories on the Internet and on reality TV try to make it seem like there’s something to the curse, and the actress who payed the mother in the first two films, JoBeth Williams, even added fuel to the fire by claiming that real skeletons were used during the making of the film (that part might be true!). But beyond the coincidental tragedies of the two young actresses dying young, there really is no other evidence of any Poltergeist curse.

Hooper followed up Poltergeist with the awesome Lifeforce, written by Alien‘s Dan O’Bannon, but also based on Colin Wilson’s work The Space Vampires. Wilson was a fiction and nonfiction writer who would often deal with the paranormal and metaphysical and what makes The Space Vampires extra fun is that Wilson wrote the book on a challenge from Wisconsin author, August Derleth. Derleth is the one who kept H.P. Lovecraft’s world and mythology alive after his death, and he challenged Wilson to write a book in the Lovecraft vein. The Space Vampires was the book, and Tobe Hooper made it come alive (or undead!) with his adaption in Lifeforce. It wasn’t a big box office hit, but it’s been critically reevaluated in recent years for the terror-filled science fiction extravaganza that it was.

After the mid-80s and Texas Chainsaw Massacre 2 not lighting the box office on fire, Hooper did mostly television work and one of his coolest shows was a 1991 TV show (hosted by Leonard Nimoy!) called Haunted Lives: True Ghost Stories where he dramatized the events of the haunted Toys R’ Us in Sunnyvale, California. Now, that story means a lot to me since I saw it on That’s Incredible! when I was tiny. It probably was the first “real” ghost story that I can remember.

The ghost story of the haunted Toys R’ Us in Sunnyvale, California involves a farm hand in the Nineteenth Century named Yohnny Yohanson who was in love with the owner of the farm’s daughter named Elizabeth. He loves her, she doesn’t love him, he dies in a tragic accident. One hundred years later, there’s a Toys R’ Us built on the site and strange things start occurring. Famous psychic Sylvia Browne shows up, has a seance, tells everyone the story, and they capture a photo during the seance of a “ghost”. It’s a classic ghost story made for TV and it had a huge impact on me as a kid. The fact that Tobe Hooper made a dramatized version of the events (that had way more inventive camera work and effects for a time than these shows usually had!) blew my mind!

Check out this great in-depth article about the Yohnny, Elizabeth, and the haunted Toys R’ Us that is well worth the read!

And it’s the Toys R’ Us story that helped us decide on this week’s Sunspot song. “Broken Toy” is a track full of 1980s’ nostalgia, when Tobe Hooper was in his directing prime. In the Texas Chainsaw Massacre it’s Sally Hardesty’s “innocence” that saves her, which is  one of the most common tropes of slasher films that followed (deftly parodied in the third act of the first Scream film), but still relatively novel back in 1974. The main thrust of this track is how once youthful innocence is lost, nothing is eve quite the same.

Ronnie’s got a million guns,
Protecting us from Mao Tse Tsung,
but I don’t want to think about,
”The Day After” today.

Hey boy, what did you say?
Can Voltron make it all okay?
Or will my faith that ran away,
bump into me someday?

Don’t look me in the eye,
I can’t take what it makes me see.
It opens a box of toys I broke,
and the ones that have broken me.
It reminds me too much,
of the way things used to be.
I can’t play with a broken toy,
I can’t live on a memory. 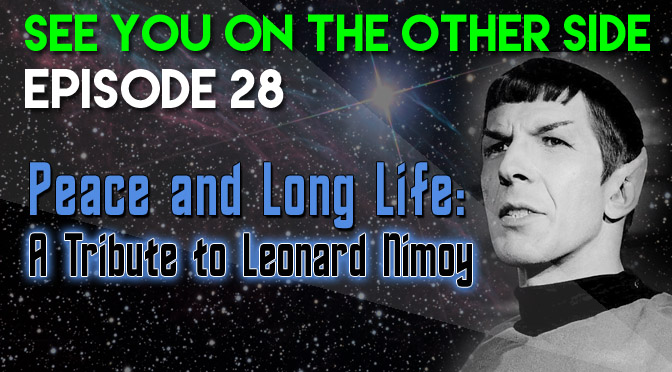 AND NOW, THE SAD NEWS…
The world lost a great man, and one of our personal heroes, when Leonard Nimoy passed away on Friday, February 27, 2015.  With such an incredibly legacy and prolific career, Mike and Wendy had quite a bit to talk about as they reflect on the “Mr. Spock” and his legacy:

Let us know if you have any special memories or tributes for Leonard Nimoy!

Being young ain’t always fun,
and growing up ain’t easy,
when you’re just a little different,
and your best friend is your TV.
You might never be a hero,
or get along with your peers,
but you could learn to be a human from,
a dude with pointy ears, well.

The bad guys were always wrong,
and the good guys always won and,
we learned how to play the game.
But now my favorite shows,
are full of anti-heroes and,
reruns just ain’t the same.

In a world a little sick,
we could use some more logic.

The only one who tried to talk,
to the Devil in the Dark.
Cuz you were bred from different stock,
like those of us who missed the mark,
See you in Sha Ka Ree, my Mister.

Mr. Spock stopped the jocks,
taking over in Space Seed,
and he always kept his cool,
when Bones would call him a halfbreed.
And we all tried the nerve pinch,
on other kids on the playground,
Till fourteen at least I still believed,
that move could knock you out, damn.

In Search Of was the show,
that made it cool for UFOs,
it weirded out my little mind.
Embarrassing as it could get,
you sang a song about the Hobbit,
somebody must have been high,

Those of us that can’t quite fit,
could use some more of your logic.

From Captain Kirk’s superego,
into the dark mind of Van Gogh,
so much of what I know,
came from your heart.
We’ll see you in Sha Ka Ree, my Mister.