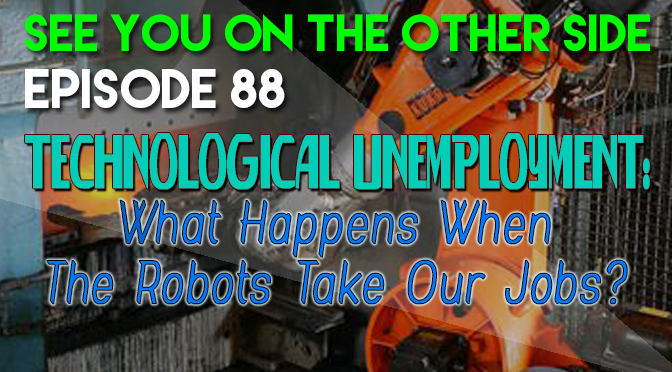 So, with Wendy on vacation this week, Allison from Milwaukee Ghosts Tours And Investigations joins me again to discuss the upcoming economic technocalypse, that’s right technological unemployment. Allison was just with me last week for our first Wizard World Comic Con in Madison, Wisconsin where we were on a panel called Wisconsin Paranormal. It was hosted by our friend, Tea Krulos, and also on the panel was J. Nathan Couch, the world’s foremost Goatman expert, and a former guest on See You On The Other Side as well. It was a lot of fun and we can’t wait to get to another one.

Notes for the Madison convention, man, there was a lot of Doctor Who cosplayers, especially Osgoods – (and the character is kind of a Doctor Who cosplayer herself, so that whole thing was particularly meta), but whoever were dressed as the Predator and Ms. Predator (for real, it was like Ms. Pac Man but way more terrifying) were the real winners. Those costumes looked like it walked off a 20th Century Fox backlot and I was looking around to see if Ahnuld was anywhere to be seen.

This last week, actor Gareth Thomas passed away and we do a quick tribute to him. Blake’s 7 is still some of my favorite dystopian science fiction. Thomas played the lead character, Roj Blake, in a desperate fight against a tyrannical Galactic Federation. It was the anti-Star Trek, but it certainly was a fun and thoughtful show. And those outfits! I love you 1970s. Okay onto this week’s main topic. It’s an election year and so people are talking about the issues that matter to them most. And what’s the most important issue to almost everyone? Well, as that famous cueball James Carville once said, “It’s the economy, stupid.”

On a sci-fi comedy bent, South Park famously has an episode where future humans come back to our time from the future where there are no jobs. They’re willing to work for very low wages and the townspeople rally around the battle cry, “Dey took owr jerbs!”

But whatever side you stand on for free trade and immigration, there is one class of worker who is coming for our jobs. I think that Kyle Reese describes them best:

Listen, and understand. That terminator is out there. It can’t be bargained with. It can’t be reasoned with. It doesn’t feel pity, or remorse, or fear. And it absolutely will not stop, ever, until you are dead.

Okay, that’s probably a little strong language for some automatons on an assembly line. But robots don’t get tired, they don’t take long breaks, and they don’t complain. They’re getting better and better at simple tasks and according to the President’s own 2016 Economic Report, there is an 80% chance that jobs that earn under $20 will be automated in the near future. And there’s a 31% chance of automation for jobs that make $20 to $40 an hour.

Yeah, so even if you’re in a cubicle job that feels pretty cushy (even though we know it’s a trap and one day we will help you rise up against your middle management oppressors), there’s still greater than a one in four chance that a robot will soon be able to do your job.

Technological Unemployment is a hot topic now, but it’s been and issue for centuries, since at least the beginning of the Industrial Revolution. New technology means that needs for work change (how many blacksmiths or even better, pewtersmiths do you know? It ain’t Johnny Tremain anymore.)

In the Early Nineteenth Century, English textile workers were getting replaced by weaving machines in factories, so they started destroying the machines. Fastest way to save your job? Eliminate the competition (watch The Wire if you want to see this in action in the modern day.) The workers started protesting and acting out more and more, and they became known as Luddites, supposedly named after a guy named Ned Ludd who was one of the first to destroy some of the new technology. And if there ever was a more 18th Century English Workingman’s Name than Ned Ludd, please send it to me.

This became such an issue that the British government made destroying a machine a capital crime, meaning you could be put to death for it. Interestingly enough, Lord Byron was one of the few defenders of the Luddites in the government. Leave it to the Romantics to defend an older way of life (I’m looking at you too, Tolkien!)

The first I ever heard of the Luddites was from a Doctor Who story called “The Mark Of The Rani” where an evil Time Lady is conducting experiments on them. Is it one of their greatest stories? No. But it does have a full-grown Tyrannosaurus Rex running around a TARDIS, so it’s got that going for it.

So, the fear of technology taking people’s jobs is an old one. And with technology increasing at a more rapid pace than ever (in just thirty years, we’ve gone from a basic mobile phone to the entire sum of human knowledge in your pocket… and Netflix too!), we need to start taking seriously that even jobs that require artistic skills are going to be in danger of automation. Yeah. Once robots watch 20,000 hours of science fiction TV and movies and can starting talking about it and writing songs, I’m out of a job too.

So what’s going to happen to us once we reach a certain level of technological unemployment?Well, according to this Slate interview with Andrew McAfee, there are three scenarios that might happen.

1. It’s all going to work out in the end. Just like the Industrial Revolution in England led to a middle class and better lifestyle for factory workers, new technology will mean new kinds of work. After all, by the time we didn’t need blacksmiths to shoe horses, we needed mechanics to fix cars. We’re going to reach an equilibrium and it’s all going to be just fine. Think Total Recall, sure there are driverless cabs, but we still need people to drive the huge drills that tunnel around Mars. (Screw you, Benny!)

2. Income inequality will increase and the workers who are left behind won’t be able to retrain. Social mobility gets cut short because society cleaves into a feudal system of lord and peasant. Look to Elysium for an excellent example of this, if you think gated communities are bad for society, wait until they leave Earth for space.

3. Paradise. Robots do the manual labor that we hate Star Trek of course is an excellent example of this in a moneyless future where people are free to “better ourselves and the rest of humanity”. But H.G. Wells also talks about this in The Time Machine where the Eloi live an idyllic life of no work and pleasure all day, but the monstrous Morlock workers who live underground come up to the surface and collect the Eloi for feeding every once in awhile.

So, #1 sounds like the same old, same old. #2 sounds like a nightmare (and you know that’s how the future will be for some unfortunate people.) But #3 sounds like where I want to get to. Who doesn’t want more time to spend with their children? More time to work out? More time to pursue the things that give their life meaning?

Well, how do we make that happen?

The idea that a libertarian economist had 50 years ago. He called it the negative income tax, but it’s more commonly known as a Universal Basic Income. Everyone gets a check every year so that they’re at least above the poverty level. Sounds like socialism, right? Well, kinda. But if the idea could be supported by a economist as frequently cited by conservatives as Friedrich Hayek then there might be something that both sides of the political aisle can agree on. After all, if we’re guaranteed to be able to feed, clothe, and shelter ourselves and our families and we can work to make more money for vacations and cool stuff, then companies will require a lot less regulation and hopefully crime will go down.

Plus, wouldn’t it be great to work on something that brings you meaning versus something you just need to “get through” every day? I’m with ya 100% and Allison and I certainly express that in the podcast. She mentions how J.K. Rowling was at rock bottom when she wrote the Harry Potter novels and went from being a single mother on the dole to one of the richest women on the planet. I don’t love Harry Potter as much as others do (I prefer Battle School from Ender’s Game to Hogwart’s), but she needed that time to be able to create and do something meaningful with her life rather than work at something she felt was a dead end. J.K. Rowling created billions of dollars of wealth and she did it on government assistance.

People have tons of economic disagreements about the current welfare state, of course, I have no doubt that the current system is flawed. But with all of our technology and all of our wealth in the world, everyone should have the chance to express themselves and create like J.K. Rowling did. Some will be better than others, but how many brilliant works are we being denied because that would-be author has to work three jobs to make ends meet? I say, just let the robots do it, already.

So, technological unemployment might sound scary, it might be a blessing in disguise. We talked before about Robert Brautigan’s hippie-fantasy poem, All Watched Over By Machines Of Loving Grace, where humanity gets to return to its natural roots while robots take care of the needs and wants, and ya know, it doesn’t sound that bad.

This week’s song is the Sunspot track, “Uncanny Valley”. It’s a headbanger wanting the opposite of Pinocchio, instead of the puppet wanting to be a real boy, the real boy wants to be a puppet.

All circuits go and power on,
Reconstructed from the pieces that were left into,
a convincing automaton,
a believable facsimile, a six million dollar masterpiece.

Refurbished scrap without a soul,
unconstricted by the defect of attachment.
Programmed for perfect control,
To smile is upgrade, this kiss is manmade.

Machine,
Machine,
Forged from the wreckage of spare parts,
this tin man doesn’t want a heart.
Just like Data in reverse,
this sentience is only a curse.
Machine.