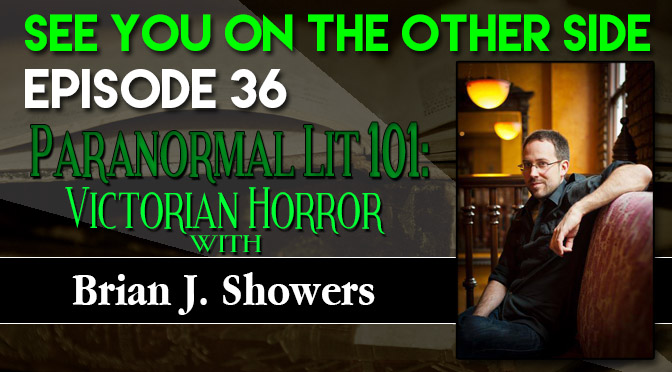 Joining Mike and Wendy today is Swan River Press publisher and author, Brian J. Showers. Brian is a college friend of both of them and left to live Dublin, Ireland in 2001.  Since leaving, Brian has written several books and become a publisher of all kinds of Gothic ghost stories as well as an expert in Victorian Horror.

They begin the conversation by discussing Brian’s interest in weird stuff, which began with Haunted Wisconsin, which showed him that you could have legends and haunted history right in your backyard and it didn’t have to be in a Transylvanian castle. The conversation turns to other great Wisconsin connections to the weird like Arkham House in Sauk City, Wisconsin which published Lovecraft, to The Ridgeway Phantom.

When Brian moved to Ireland and found out that influential Victorian Horror writer, J. Sheridan Le Fanu was buried right up the street, he was influenced to learn more about his neighborhood, the Rathmines, in Dublin. In addition to writing a book on a walking tour of his new city,  he edited a book of short stories inspired by Le Fanu, and then wrote a collection of ghost stories inspired by the Rathmines – becoming more connected to Dublin by creating more weird and the wonderful tales of the Irish capital.

The conversation then turns into more of how the Victorian Horror story has influenced so much of modern culture and how in that era, Spiritualism (with mediums, séances, and the like) became a gigantic cultural phenomena, and its fiercest proponent was Sir Arthur Conan Doyle. We talk about the friendship between Conan Doyle and Harry Houdini (another Wisconsin connection, he was raised in Appleton and lived in Milwaukee for three years), who was a great Spiritualist debunker.

That brings us to Wendy’s story of getting a private tour of Swiss home as a foreign exchange student and Mike brings up his favorite episode of the show, Voyagers!

The Bleeding Horse and Other Ghost Stories

More details on the friendship between Conan Doyle and Houdini

Proper little misses sharing,
little bloody kisses,
and every fire starts from just a spark.
Our secret experiments,
on your angel innocence,
don’t matter what you look like in the dark.Just you wait until the sun goes down, down, down.
when she whispers you’re hers forever now.Carmilla,
desire comes at you sideways,
Carmilla,
Would you dare to speak her name?

Just you wait until the sun goes down, down, down.
when she whispers you’re hers forever now.

Carmilla,
desire comes at you sideways,
Carmilla,
Would you dare to speak her name?