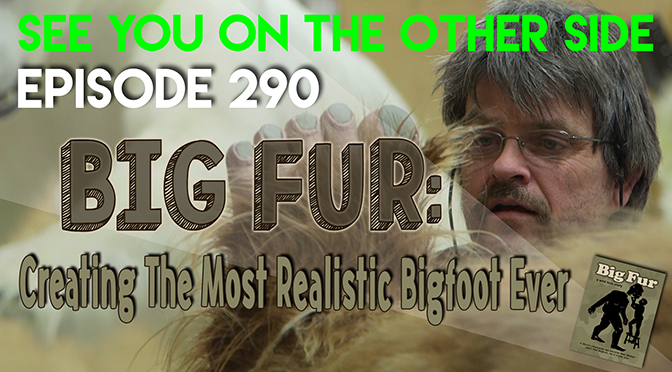 In the wilds of western Alberta, Canada, Ken Walker lives, hunts, creates, and sings Roy Orbison tracks. He’s a world champion taxidermist who specializes in recreations of extinct animals. He’s brought back stunning versions of the Sabretooth Tiger and the Irish Elk and his work is featured in the Smithsonian Institution. He’s also a Squatcher and in 2015, he began a quest to create a perfect version of the Bigfoot from the infamous 1967 Patterson-Gimlin film, a not-so-little lady he calls “Patty”.

Kansas City filmmaker Dan Wayne was taking on taxidermy as a hobby when he encountered Ken on an internet forum. He found Ken’s work fascinating and was amazed by the amount of access that this first-in-class taxidermist was giving him online to help developing his own skills. And when he discovered that Ken was working on a Sasquatch, he thought it would make a great documentary.

And he was right. The ensuing documentary, which played at Slamdance Film Festival in 2020 is Big Fur, a compelling story about a man’s quest to recreate a creature that many have claim to have seen but only really has been captured on shaky 1967 filmstock. Ken said that he wanted Bigfoot experiencers to see his mount (what taxidermists call their creations) and say “That’s exactly what I saw.”

I have been a Bigfoot skeptic for awhile now because I just have too many unanswered questions, but talking to Ken and Dan about their documentary and Ken’s theories on the creature have once again opened me up to the possibility. Skeptics, believers, and people just interested in Bigfoot and taxidermy will find a lot to enjoy in this wide-ranging and entertaining discussion, including:

To learn more about where you can see Big Fur, check out the movie website and here’s a quick interview done by our friend Scott Markus from WhatsYourGhostStory.com when he met Dan and Ken at Slamdance.

For the song this week, we couldn’t resist a couple of things. Number one, Ken isn’t just a taxidermist but also a Roy Orbison impersonator (and he even sings a bunch in the film!) Number two, the fact that they call the sasquatch in the Patterson-Gimlin film “Patty” and I didn’t even realize it was a female, blew my mind. So, of course we couldn’t resist making a rockabilly song about our favorite new girl, “Patty”.

Oh Patty I know it’s all true
Oh Patty, baby, I believe in you

Oh Patty, where you think you’re going to?
Oh Patty, baby, I believe in you.

She’s an outdoors gal,
Hiding in the trees,
She don’t wear no shoes so
I hope you like big feet.

Oh Patty. Won’t you give us a little view?
Oh Patty, baby, I be

Oh Patty, They all tell me I’m a fool
Oh Patty baby, I believe in you.