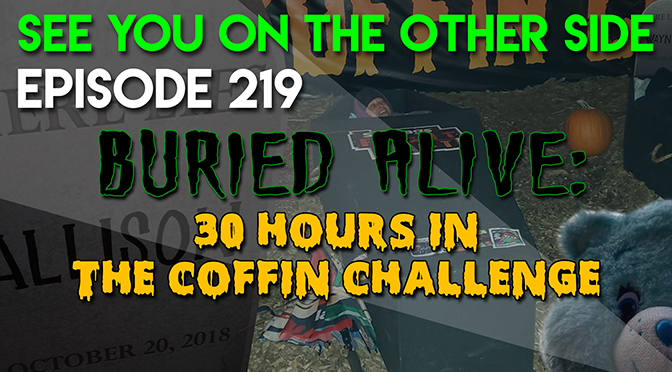 On October 21st and 22nd, Allison Jornlin from Milwaukee Ghosts  participated in the Coffin Challenge at Six Flags Great America outside of Chicago, Illinois. What was the challenge?

Allison texted me about it a couple of weeks ago and she was incredibly excited to be part of it. 3000 people (including me!) submitted to be chosen for the coffin challenge and spend those 30 hours in the Northern Illinois cold in a casket. Six people were chosen and my sister made the cut.

Right around 2am in the morning is when things started getting unpleasant as the torture commenced. You see, to make it hard on them, the ghouls from the haunted houses at Fright Fest decided to keep them up…

And that’s where Allison started losing it. Sleep deprivation is a classic way of torturing people and making them want to give up, and we’ve seen it in fiction from Lost to A Clockwork Orange. This night she was tormented by the Six Flags workers as well as a little nightmare ear worm (as many beleaguered parents can attest to, including myself) called “Baby Shark”. That was put on blast for the coffin challengers from 3 to 4am.

So, did she make it? You bet she did. And in this episode, we talk with Allison about her experience and how she soldiered through the Six Flags Coffin Challenge of being buried alive for thirty hours. Also, we get some cool ghost stories from the Gurnee, Illinois area with Scott Markus from WhatsYourGhostStory.com (he used to work Fright Fest at Six Flags Great America himself back in the day!)

And that’s not all! We learn a little about:

The Sunspot song this week uses the metaphor of being buried alive to talk about the ways that we can create our own “Cask of Amontillado” through lies and self-deception. When you lie, you have to pile on more and more in order to avoid being caught, and after awhile it just feels like you’re “Buried Alive”!

When your heart is sick from beating,
cuz this double life you’re leading
ain’t no fun.
You need to find your bearing
‘fore you’re staring down
the barrel of a gun.

Cuz every lie just builds on every lie
You’ve got a crypt but you ain’t gonna die
only as good as your latest alibi.
The more you struggle, the more you’re tied
left in a hole where you’ll never see the sky.

When your mind is tired of roiling
‘cuz the rope just keeps on coilinga
’round your throat.
You better find some kind of spin
or you’re gonna swim
the dead man’s float.

Cuz every lie builds on every lie
You’ve got a crypt but you ain’t gonna die
only as good as your latest alibi.
The more you struggle, the more you’re tied
left in a hole where you’ll never see the sky.