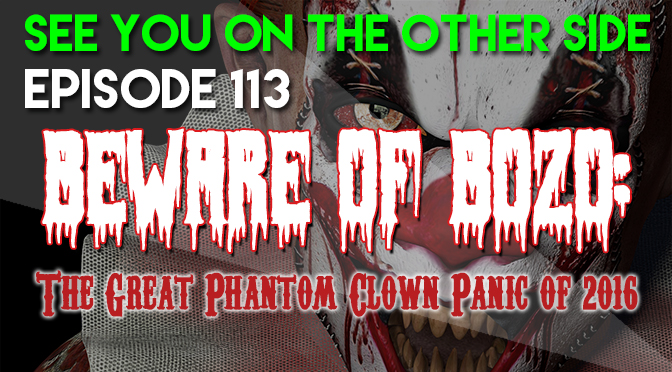 2016. Just saying the year feels like we’re living in the future. We’re well past Back To The Future II now and we’re only 3 years away from Blade Runner territory. But he sad truth is that there’s no jetpacks, our Artificial Intelligence autocorrects our communication into incoherence, and the U.S. Presidential Election is straight out of a 90s dystopian satire.

We have more access to information than ever before in history. In fact, most people in our country carry the sum total of human knowledge in their pocket. Any fact is at our fingertips and any answer at our beck and call. So it just goes without saying that most people no longer panic about urban legends because they all get neatly debunked when we do a quick check of snopes.com… Wait. Did you say clowns are trying to lure children into the woods?! OH MY GOD. SAVE THE CHILDREN.

Tim Curry’s performance as Pennywise the Clown in the 1990 television adaptation of Stephen King’s IT has set the gold standard for scary clowns for a generation. While Killer Klowns From Outer Space might have been  a fun and campy horror movie and Blood Harvest starred Tiny Tim and Wisconsin State Lottery beauty Lori Minnetti (my and Allison from Milwaukee Ghosts‘ parents have a strange connection to both of them!), when people think of terrifying clowns in the late 20th Century, it’s Tim Curry’s Pennywise that they’re really thinking of. And they should, he’s scary as Hell and IT was shown on free over-the-air TV back when tens of millions of people still regularly watched scripted dramas instead of just dancing and singing competitions.

Look, I know there might have been a time when clowns weren’t terrifying. That time is over. There’s a real psychological term for the fear of clowns called “coulrophobia”. This year, through the magic of the Internet and in our never-quenched desire to save our children, we’re being inundated with tales of strange and sinister clowns lurking in our cities. It’s gone from a funny story that’s shared among friends on social media networks (and we covered it first in our paranormal newsletter!) to a full-blown worldwide phantom clown panic. Indeed, what started out this summer as a stunt in Green Bay, WI (for a film called Gags The Clown, our friend Cactus Joe interviews the director in this episode as well) has spread all across the country.

This latest era of clown scares starts in 2013 in Northampton in the United Kingdom. And while that clown isn’t even doing anything scary in particular, just the fact that someone is out there in the street dressed as a clown and waving to people spooked the locals. The innocuous nature of his performance is what freaked people out, in fact The Huffington Post headline was “Northampton Clown Terrorizes English Town Just By Standing Around“.

Then in November of 2015, in Waukesha, Wisconsin (right by my hometown and the location of a new awesome ghost tour that I wrote and Wendy guides!), a local teenager  had a similar chilling effect on the populace. Once again, this clown isn’t doing anything, just hanging around and it’s disturbing people.

Fast forward to 2016 and Gags the Green Bay Clown starts terrorizing the frozen tundra of Titletown. This summer, the story goes viral and no longer are these formerly jocular characters just occupying our nation’s street corners, they’re now in the schoolyards.

Clown sightings in South Carolina in August had children claiming that clowns were trying to lure them into the woods with money. You mess with children and people freak out, and boy have they ever. You know how rumors spread through a junior high school population? That’s social media.

Schools have been locked down in Illinois, Tennessee, Maryland, Ohio, New York, and Florida. And it’s not even real clown sightings that are causing this, it’s just clown-based social media threats. It’s children reporting clown sightings and adults freaking out over it. Our schools have become zero-tolerance zones for clowns and it’s all because children are making up stories, Salem-style.

In May of that year, the media picked those reports of clowns up and the police of nearby Brookline, MA even issued a warning after learning of two “clown men” looking to lure children into their white van with candy. A little later that year, in Mineral Point, Wisconsin, a “phantom” was seen by dozens of teenagers, and even a police officer, John Pepper, talked about seeing “a huge person with a white-painted face”.

But here’s the thing, besides the policeman seeing the clowns in Mineral Point, none of the other clowns were ever really seen by the police. Or even a reputable adult.

In fact, cryptozoology demigod, Loren Coleman (who we’re all going to meet and party with at the 2016 Milwaukee Paranormal Conference coined the phrase, “Phantom Clown” in his book, Mysterious America. They were phantoms because there were never any arrests made for these phantom clowns actually breaking the law, or even existing outside of elementary school imaginations, perhaps inspired by images of Gacy in the evening news broadcasts that their parents watched.

But for the people who think it might be fun to dress up and join in on the phantom clown prank, well you better think again. A couple in Menasha, Wisconsin, were just arrested for child neglect for leaving their four year old at home while they went on out to scare the local populace. Indeed, this time around people aren’t taking the clown sightings lying down, in fact at Penn State University, reports of creepy clowns inspired the students to head into the streets to seek them out for a clown beatdown.

Lollipop eyes,
and a painted face
hide a taste for homicide.
and It’s no surprise,
every place we look
we find a crime.

Danger in every corner,
We’ve got murder on our mind.
you might play the fool, but if you come by a school
we will eat Bozo alive.

Turn your frown upside down
and send in the clowns,
we’re gonna burn this big top down.

We don’t need a reason,
for hunting season,
A Krusty krackdown,
we’re coming for the clowns.

Hey you with the nose,
that’s as far as you go,
What’s with those big shoes?
Stay away from our youth
cuz we know the truth.
It must be real, it’s on the news.

Danger in every corner,
We don’t care if it’s all in fun,
Come by a kid, you’ll be sorry you did,
The mob is out for blood.

Turn your frown upside down
send in the clowns,
we’re gonna burn this big top down.

Special thanks to our good friend (and a fellow musician!) Cactus Joe for interviewing Adam Krause about Gags the Clown!

P.S. We recorded this podcast on Scott Bakula’s birthday. Hope it was a great one, Scott!