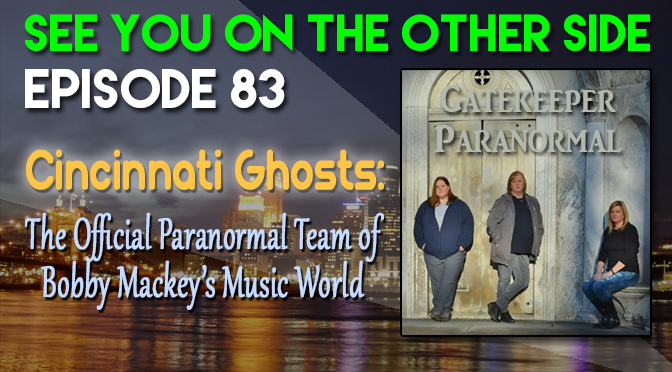 This week, Wendy and I are traveling through the country stopping at haunted sites and playing music and on Saturday we stopped in Cincinnati. It was a lot of fun and we’re doing it all this week, so check out the dates right here at https://othersidepodcast.com/tour!

And speaking of Cincinnati, our guests this week are the fine ladies of Gatekeeper Paranormal, who are the official paranormal team of Bobby Mackey’s Music World (keep reading to hear about one ofd its most famous ghost stories). I talk with lead investigator Kim Short and co-founder Laura Roland and you’ll hear all about their adventure’s at Bobby Mackey’s.

If you don’t have time to listen to the whole podcast, here’s 4 quick haunted stories of Cincinnati ghosts to tide you over!

Cincinnati Music Hall is a place where you can see some really messed up stuff. from flying Norse gods to Italian lovers being dragged to Hell, opera loves to turn up the crazy.

Originally this was the site of a Potter’s Field which is a graveyard for the poor or people without families, like those who died at the nearby Cincinnati Commercial Hospital and Lunatic Asylum, or the place on 12th and Elm that was a home for orphans before it became known as the “pest house” because it’s where they kept patients with infectious diseases.

Because you don’t use coffins in a potter’s field, bones will often churn out of the ground whenever renovations are done here, like they did in 1960 and 1988.

Since then, some patrons of the hall have seen strange figures waving at them from the other side of the hall only to disappear when they look away for a second. People have also heard a music box play a song called “Let Me Call You Sweetheart” when there are no music boxes around.

Roger Krebs, who worked on the maintenance crew for almost two decades has said that he has heard piano playing when there’s no one else in the hall, closed doors open on their own, and a floor buffer that mysteriously turns on and off for no reason. Cincinnati paranormal groups have also reported a freight elevator that has stopped at the wrong floors for no reason and the doors behaving erratically during investigations.

Union Terminal is now a museum and a mall, but in the twilight years of the railroad it was one of the busiest places in the city. Train stations are usually rife with paranormal stories, whether it’s lovers saying their last goodbye as a soldier goes off to war or a family coming back together after a long separation, it’s a place of strong emotion. And sometimes those emotions stick around after the physical bodies have gone.

In September of 1989, a criminal named Thomas Haynes killed a security guard, Shirley Baker, while robbing the Union Terminal and it’s her ghost that some people have seen still patrolling the halls. People have heard her rattling the doorknobs and checking the locks when there is no one else present and some members of the cleaning crew won’t go into certain areas of the mall alone.

And that’s the weirdest thing. after all, what’s to be afraid of? Shirley is just dedicated to her job, still protecting the mall decades after her final shift has ended!

3. Bobby Mackey’s Music World
This music venue and bar in Wilder, Kentucky, bills itself as the “Most Haunted Nightclub in America”. is it the most haunted? I don’t know that anyone is keeping score, but it got Bobby Mackey a slot on not only Jerry Springer but also Geraldo, and when you can do that without making love to a family member, that means something.

So, the romantic legend of Bobby Mackey’s comes from the 1950s, when the club was mob-affiliated and known as “The Latin Quarter”, a dancer by the name of johanna had fallen in love with a singer at the club by the name of Robert Randall. According to the legend, Robert got her pregnant and her mobster father ended up hanging Robert in the dressing room. Johanna, so distraught by her lover’s murder at the hands of her father, took her own life at the club by poisoning herself.

Patrons of Bobby Mackey’s will sometimes see a woman dressed in a 1950s outfit or they’ll hear a woman’s voice in the club when there’s no one around. that’s the ghost that they think is Johanna.

Bobby Mackey himself wrote a song about Johanna and here’s some of the lyrics:

4. The Tale of Tiny Town

Here’s a great urban legend about a town right north of Cincinnati by Mount Rumpke. It was said that there was a village of tiny houses around there at a place called the handlebar ranch. in those tiny houses was said to live a large population of retired circus dwarves. seriously.

Having been laughed at and made fun of all of their lives in the circus, they shun the rest of society, so that when you visited Tiny Town, they would throw rocks at you and yell at you to leave. And the kicker of course, is that you knew you were in the right place when you could hear the circus music!(?)

Of course, this story is ridiculous,  but not completely crazy. Anna and Percy Ritter Who owned the Handlebar Ranch, had a hayride business there and did have a collection of small buildings on the property that the hayrides could look at. There were also some old school bells that Percy salvaged and sometimes kids would sneak onto the property and ring the bells in the middle of the night.

As to the collection of circus dwarves? well, Anna Ritter was only 5’3 but no one knows exactly where that story came from, so people think that the small houses in the village are what contributed to that story, no matter that there were actually no little people there.

This week’s song is an old Sunspot chestnut that fits well into an episode about Bobby Mackey’s. Our track, “Meat Market” was recorded in 1998 and it’s originally a track about hook-up culture in  college bars. But since Bobby Mackey’s is reputedly a former slaughterhouse and Johanna was a dancer who hooked up at the club, well we thought it might be the perfect song for this episode.

Here’s an ancient video of us in the studio recording it and here’s another Queen City connection, I’m wearing a Hustler shirt (given to me by my college buddy from Cincinnati whose uncle was one of Larry Flynt’s lawyers!)

We’re not looking for an answer.
We don’t care what we find,
We’ll say anything that we can,
to get what we want tonight.

This hunting ground is a sleazy dive,
where deperate people lead desperate lives.
All we do is live to survive,
I said to her as she looked in my eyes.
Is she staring at my face?
Is she looking at my ass?
Can she find her knight in shining armor,
through the bottom of a glass?
We’ll say anything that we want,
to get what we want tonight.

One more trip to the Meat Market.
You’re looking for Prince Charming,
to break your heart.

This hunting ground is a sleazy dive,
where deperate people lead desperate lives.
All we do is live to survive,
I said to her as she looked in my eyes.

Is she staring at my face?
Is she looking at my ass?
Can she find her knight in shining armor,
through the bottom of a glass?
We’re not looking for forever,
we don’t care what you think.
We’re just a bunch of primates,
that know how to mix a drink.