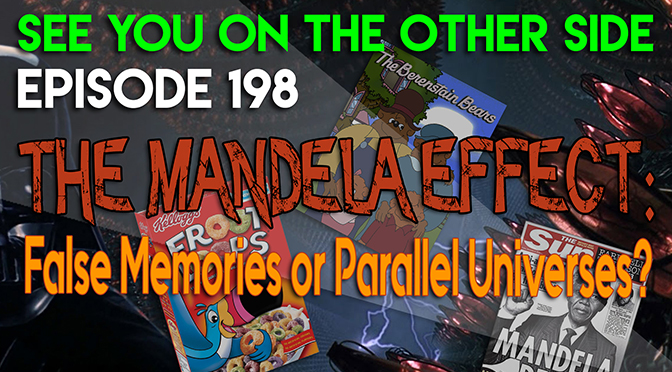 The Mandela Effect was first coined as a term in 2010 when paranormal consultant Fiona Broome discovered that she met many people who believed that South African freedom fighter had died in prison in the 1970s and had not survived to eventually be freed an made the leader of the country in the 1990s.

Usually we would just attribute this strange misremembering of history to the whole “human beings are idiots” thing, but since its initial discovery was by someone involved in the paranormal, people started talking about how maybe this might be something more.

One of the first theories was that it’s the result of parallel universes, where there are an infinite number of universes and they can be created every time a different decision is made. People are just “remembering” a different universe.

We discussed how memories can be easily falsified in episode 55 about alien abductions, past life regression, and satanic ritual abuse, but The Mandela Effect has certainly consumed plenty of oxygen in the paranormal space over the past couple of years. Probably because it’s a fun way of playing “remember when” and we can discuss our childhoods and how faulty actually all of our memories actually are.

The very first time that I learned about the malleability of memory was in a Different Strokes episode. It’s based on the classic Kurosawa film Rashomon (if you would like to know how influential the Japanese film director Akira Kurosawa is, just read this article on how George Lucas was incredibly influenced by the movie The Hidden Fortress in his creation of Star Wars.) Rashomon is a about a trial that shows the same crime happening from several people’s perspectives and how those memories of the same event are different from person to person. Different Strokes even called their episode “Rashomon II”!

In this episode we go over some of the most compelling examples of The Mandela Effect including:

This week’s song is actually one of our oldest recorded Sunspot tracks. It’s about nostalgia and how nice it is to live in the past sometimes, even when that past might be something you invented for yourself. But in the end, you have to come back to the real world, even if you wished you’d made different choices in your past and feel left behind. The song is called “Pretend”.

I think I lost you along the road,
because I didn’t know how to grow up.
Maybe that’s why I feel so old,
my life flashes before my eyes.
Maybe we could talk over a beer,
about the way we think things ought to be.
We could try to remember how we got here,
and whatever, and whatever became of me.

And I think I missed the train,
well, I guess I should have bought a ticket.
I don’t think I ever changed,
time slips by and I’m still the same.
We were running hand in hand,
I didn’t know you’d go so fast.
That’s why I just don’t understand,
how you reached your destination and I’m still living in the past.

I’m the last one standing here.
Just a relic in the museum of our lives.
I’ll be waiting when you come back.
I’ll be the one who’s just a step,
just a step behind the times.