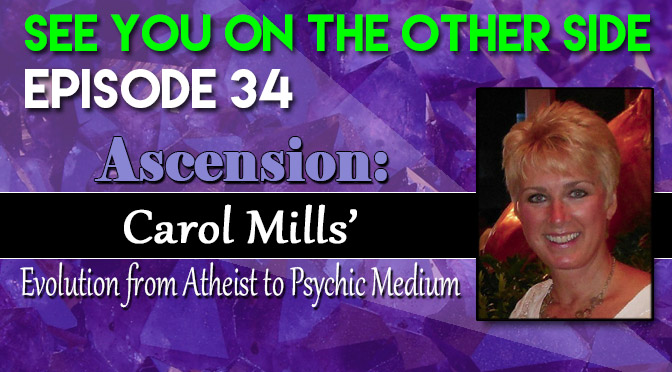 Mike and Wendy start out the show with a quick discussion on how Mike is happy that they didn’t mention the Twin Peaks revival in last episode’s song about The X-Files, “Don’t Mess This Up” because now it looks like that revival is in jeopardy of not happening. After going through the definition of medium last week, they talk a little bit about the interview. Mike once again described why he doesn’t believe in orbs when it comes to ghost pictures and the importance of keeping an open mind when talking to people with extraordinary claims.

Then we talk with Carol Mills on how she grew up in a family of atheists and had never even been interested in the paranormal until the loss of her dog, Jake, who she calls her spirit animal soul mate. It was Jake communicating with her from the other side that led her to believe that she was sensitive to spirits that wanted to communicate with the living.

From there, we talk about how she senses spirits and other entities and doesn’t ever sugarcoat the messages that she receives. She does mention how she has been getting many dark readings as of late and we discuss a little the war between the light and the dark for human souls. We talk about “in-betweeners”, entities that aren’t human but fairies and goblins that like to mess around with humans. She talks about her “ascension”, a word she uses for her evolution to someone who doesn’t believe to someone who can pierce the veil, and how her life changed when she started her business as a psychic medium.

Then we finish with a message for all the podcast listeners to “Stay in the light!” and we play a song inspired by the interview, “Ascension”.

The dark and the light they want you.
everyone competing for your mind.
Your mind.
You can see things like no one else.
you’ve got to leave your friends behind.
Behind.Your life’s no longer a bore,
Secret wars and hidden doors,
you’ve found.Opened your third eye to see,
thrown back the veil of secrecy,
unbound.Ascension,
Ascension.
You’re an X-man now.
More than a human now.