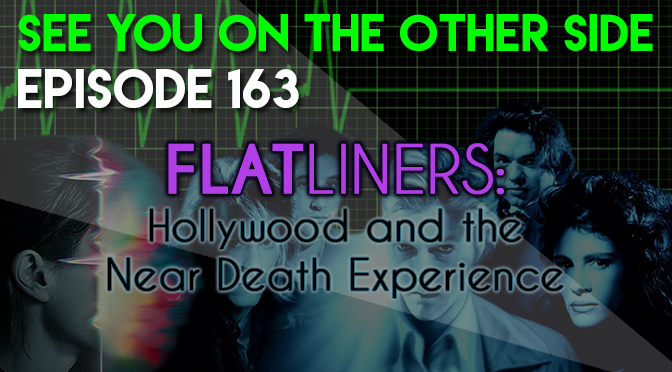 Looks like there is no intellectual property that the great minds of Hollywood are afraid of resurrecting. Twenty seven years after it originally premiered, they’re bringing back Flatliners as a quasi-reboot / stealth sequel. They’re probably getting the message that us geeks are getting tired of rebooting properties when they could basically create a new story with new characters while keeping it in the same universe and even just some kind of nod to the original can satiate fans who are looking for a continuation of the story.

Joel Schumacher made one of the 1980s most stylish and inventive horror films with The Lost Boys (a film we’ve talked about on this podcast a hundred times) and he took the main heavy from that film (a little actor by the name of Kiefer Sutherland) and made him the lead of his next movie, Flatliners.

Flatliners is a film about medical students who create Near Death Experiences for themselves (the flatline of the title) and then get resuscitated back to life. They’re looking for the last frontier, what happens after we die, what Shakespeare called “the undiscovered country from whose bourne no man returns”, well, unless you’re Kiefer Sutherland, Kevin Bacon, Billy Baldwin, Oliver Platt, or Julia Roberts.

What they find is a cosmic justice waiting for them, an accountability for their sins in life waiting for them. And those sins can now come back to haunt them in our world, brought back through the portal of the Near Death Experience. That’s the gist of the story and it’s still an effective horror film. We’ll see about the remake starring Ellen Page and Diego Luna (who are usually pretty great) and directed by the original The Girl With The Dragon Tattoo director, Niels Arden Oplev (and written by the dude who wrote Source Code which is a solid Twilight Zone episode of a movie!)

Anyway, when you think of a Near Death Experience, you think of your life flashing before your eyes, a tunnel with a light at the end, and sometimes an Out of Body Experience where your spirit leaves your body and you watch what’s happening to you.

Well, science seems to have an answer for some of those aspects of NDEs, there are others that consistently confound modern science, including Out Of Body Experiences during clinical death (cardiac arrest at least) that are not quite explainable and in one case, seemingly impossible.

Then we go into celebrity Near Death Experiences, from Kiefer Sutherland’s own father Donald, to Johnny Cash, Gary Busey, and many more.

This week’s song is based on Dylan Thomas’ classic poem “Do Not Go Gentle Into That Good Night”, with our own track about raging against the dying of the light. Here’s a headbanger about going out with a fight form our own flatline, “Pre-Emptive Strike”.

And when I’m hanging by a thread,
Tied to machines and half-dead,
and when you think it’s my final act,
don’t pull the plug,
I’m coming back.