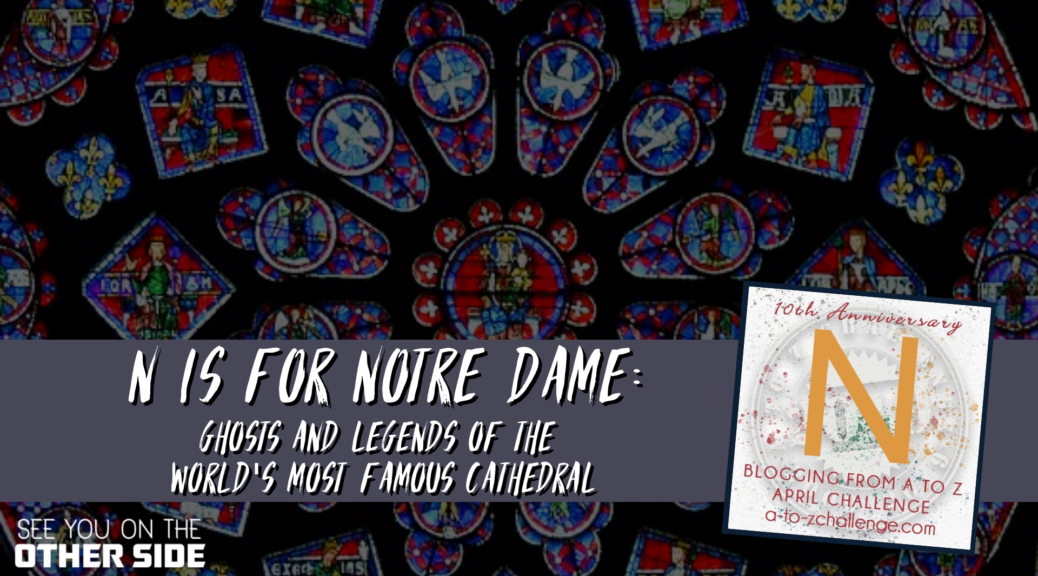 Although some claim the thoroughly modern French don’t believe in God or ghosts, let’s be real and face the truth.  Everybody believes in something at least bordering on supernatural, even if they don’t readily admit it.  The Notre Dame Cathedral in Paris, brutally ravaged by fire on April 15th, 2019, is a prime example.  There’s something in the folklore of Notre Dame Cathedral for everyone — ghosts, curses, holy relics, and miracles.

Dozens and dozens of people have killed themselves at Notre Dame Cathedral, and many others have tried.  There seem to be two off-ing options repeated over and over — the classic leap off one of the towers or the showy spectacle of off-loading a pistol into your head at the altar in the middle of mass.  Although it’s no match for the Eiffel Tower, where literally hundreds of people have committed suicide, Notre Dame has its fair share of harrowing stories.  Although the gun to the face before a packed house might seem like the most dramatic choice, the leapers of Notre Dame, especially those of the female variety, take the prize for sheer horror and eerie echoes of detail.

The death of Marie Felix in 1882 is probably the most famous because it is the goriest.  The specifics are so graphic that in the week following Marie’s death, 25,000 Parisians visited the morgue per day just for the chance to view her mangled corpse.  Although her name is forgotten by most, her suicide is the reason most cited to explain any paranormal activity in the cathedral.

Marie is described in the newspapers as a beautiful, young woman with extraordinarily long hair arranged into two thick braids which she wore rolled around her head. She was first noticed by the cathedral’s security staff one October morning as she impatiently paced about the cathedral for about two hours. Some say she was denied access to the towers without a chaperone, so she was most likely desperately seeking someone to accompany her. As it happened, she would finally meet an elderly lady that morning, whom she kindly invited to lunch.  After Marie provided the unnamed lady with a nice lunch at a local restaurant, they returned to the cathedral at 2 p.m., ostensibly to gaze upon Paris from the vantage point of the towers. However, an unexpectedly heavy downpour forced them to take shelter in the watchman’s sentry-box.  Then suddenly, for no apparent reason, Marie made a mad dash, and before anyone could stop her, she climbed the parapet, flinging herself forward.

Marie immediately fell upon the spikes atop one of the railings, which sliced her body in half at the waist.  The lower half flew backward onto the flags of the porch while the upper half remained impaled.  Her body was broken “completely into pieces by the shock upon the stones of the Place du Paris”, according to another article.  Marie was later identified as the daughter of a local tradesman.  Her family attested that Marie had often threatened suicide and that her actions were not due to any recent disappointments.  The coroner’s post-mortem findings included lesions on the brain which were thought at the time to confirm that Marie suffered from “suicidal monomania” just as her relatives had claimed.

A similar incident in May of 1890, claimed the life of a lovelorn 21 year-old.  The unidentified woman also leapt from the towers and, according to the account, was “dashed to pieces in the street below”. More recently another pair of suicides claimed additional victims.

In October of 1964, 21 year-old American tourist Veronica Mcconnell had just arrived at Notre Dame, her first sight-seeing spot of the day, when another woman climbed over the balustrade of the North Tower.  Only moments later she took the plunge, falling directly onto Veronica, killing them both.  An almost identical scenario would transpire in August of 1983.  Veronique Stalla-Bourdillon, 24, plummeted to the pavement killing herself and flattening Johanne Pelletier, 29, of Montreal, who had been standing at the doors to the cathedral unaware of her impending doom.  Perhaps this morbid history explains the most reported ghost experience at Notre Dame — encounters with female apparitions seen pacing among the towers, flitting between the gargoyles.

During the construction of Notre-Dame, a young artisan called Biscornet was tasked with the creation of elaborate ironwork to decorate the cathedral’s doors.  Biscornet soon realized his ambition has gotten the better of him, so he casually called on the Devil for help, as you do.  While Biscornet took a nap, a masterpiece of intricate ironwork magically materialized.  Once completed, the Devil snatched Biscornet’s soul of course.  Yet the doors could not be opened by normal means until they were christened with holy water.

Although many seem ready to deride relics and the miracles with which they are credited, dismissing such notions as magical thinking, there are many more who believe. Can holy objects bestow healing and grace upon the faithful? In the Catholic Church, there is a strong conviction that anything which has come into contact with Christ or the Saints is imbued with extraordinary powers. During WWI, Germans bombed Paris on October 12, 1914.  As bombs fell on and around the Notre Dame Cathedral for some reason they did not explode and the cathedral was undamaged.  Many might consider this a miracle.

Notre Dame was home to many relics from the Crucifixion including a piece of the True Cross, a crucifixion nail, and, most notably, the Crown of Thorns worn by Jesus.  A particular miracle attributed to the Crown of Thorns is called “The Miracle of the Thorn”.  Once every 70 years, when Good Friday coincides with the Feast of the Annunciation, the Crown of Thorns is said to once again drip with the blood of Christ.  This fragile relic is encased in a crystal ring, held together by clasps of gilded bronze. Jean-Marc Fournier, Chaplain of the Paris Fire Department, assisted by a human chain of volunteers, entered the burning cathedral to rescue the Crown of Thorns from the April 15th fire. The relic is currently being housed at the Louvre for safe keeping.

In addition to the ghost stories and legends explored here, in this podcast episode, we uncover:

Plus we analyze the inevitable claim that Nostradamus predicted the blaze!

So many people shared our despair about the destruction of such a famous landmark, we decided to share a Sunspot oldie from our first demo tape, that eventually made on our album. Here’s a track about acceptance, when you just can’t fight anymore; it’s one of our saddest songs, “Defeated”.

Never look directly into the,
heart of the sun,
Never leave your battlefield,
before your fight’s been won,
and let the ghosts that haunt me,
come visit me tonight,
I want to join their midnight dance,
I want to surrender under the moonlight.

When will the war inside your heart ever end?
Why must you fight it all alone?
Can you fill your empty soul on your own?

I lay defeated,
torn and broken at your feet,
Can I make you happy now?
I lay defeated, you have brought me to my knees.
I cannot fight you anymore.

And I’ll try to hide the bitterness,
that my heart holds,
I’ll try to regain the innocence,
that you bought and sold,
And I’ll try to pick my broken pieces up off the ground,
Will you care?
No, you won’t care,
when they fall back down.

When will the war inside your heart ever end?
Why must you fight it alone?
I see the blood that’s on my hands is my own.

Does he do the things I never did?
Does he make you feel wanted?
Tell him to make you happy the way I never could.
Even though you’re standing next to me,
you’re a million miles away.

One thought on “244 – N Is For Notre Dame: Ghosts And Legends of the World’s Most Famous Cathedral”