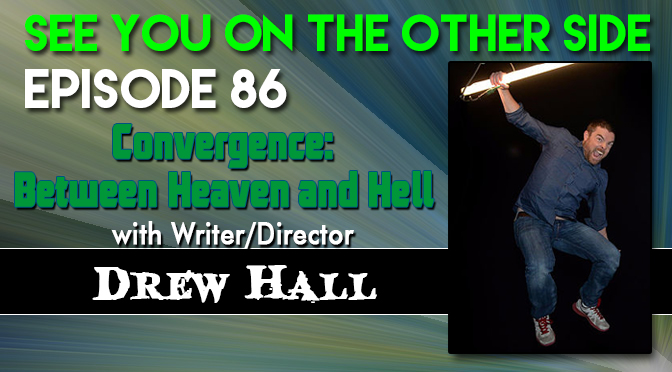 First things first, our new release, American Monsters, is live and you can download the newest EP for free at http://www.sunspotuniverse.com – it’s three songs that were inspired by this podcast and we took them into the studio. You will love how these tracks turned out!

This episode features the writer and director of the film Convergence starring Clayne Crawford (from SundanceTV’s Rectify and who will be playing Mel Gibson’s role in the new Lethal Weapon reboot) and Ethan Embry (I loved him in That Thing You Do… but he was also zombie fodder in the latest season of The Walking Dead). Convergence, written and directed by Alabama-based filmmaker Drew Hall is a paranormal thriller in the Jacob’s Ladder vein.

Set in 1990s Atlanta (and you can tell that right away because of the Everclear and Toad The Wet Sprocket on the radio), a police detective gets caught in the explosion of an abortion clinic bombing by a religious extremist group and wakes up in a hospital caught in a nightmare scenario where he has to hunt down the leader of the extremist group who is causing mayhem all through the hospital.

In some more 90s awesomeness, the soundtrack was also partially composed by Helmet’s Page Hamilton. Betty was one of my favorite hard rock albums and Ben (the guitarist from Wendy and my band, Sunspot) used to jam out at rehearsal to “Unsung” in high school all the time.

So number one, is the movie any good? Yes. Convergence is a thoughtful horror film with some clever modern twists (the appearance of the Ghost Hunters-style paranormal investigation team). There’s a little bit of gore (my favorite is a scene that ahem… took the words right out of my mouth) and there’s some of the inescapability of dream-logic terror. One of the things I enjoyed most about it though was its treatment of religion.

Now I’m mostly used to seeing only a few kinds of religion in film:

1. The Catholic Church’s exorcists as wizards or priests as holy warriors in vampire movies.

Back when Peter Jackson was making horror films (but still usually about 25 minutes too long), his film Brain Dead has my personal favorite of the badass priest archetype (please do not watch this Youtube clip at work, it is NSFW all the way.)

2. Religious zealots as redneck murderers. Kevin Smith covered this one in Red State.

3. Faith-based films where atheists are engaging in a war on Christianity and God hands out miracles like mini Snickers on Trick or Treat night. Jennifer Garner went from The Invention Of Lying (Ricky Gervais’ love letter to atheism) to Miracles From Heaven, a new faith-based film where God basically saves her sick kid.

While these depictions of faith and religion are what we’re used to and the antagonist of Convergence sometimes veers into Red State territory, the nice thing about Convergence is that its themes of redemption and faith are given plenty of breathing room.

Now, to be fair, you’re not going to get Diary Of A Country Priest–levels of cinematic spiritual contemplation and some of the dialogue is a little too on the nose, but it’s nice that a horror movie with supernatural elements can feature spirituality upfront and center without sanitizing the religious elements or making everyone who has faith look crazy. It’s a refreshing change of pace.

Now, if you’d like to watch the film without any spoilers, then you can find links to download it here or you can grab it on Blu-Ray at your local Best Buy. Then come back and listen to the podcast!

In my conversation with Convergence auteur, Drew Hall, we go in deep on the influences behind the film. From the paranormal reality TV-influenced ghost-hunting team (called G*A*P*S*, ha!) to the real-life abortion clinic bombings of his youth to the details that he took directly from Dante’s epic 13th-century poem, Purgatorio.

So, if you’re not familiar with Purgatory, it’s a Roman Catholic concept that if you died and your soul is still stained by sin, but what you did isn’t really that bad to send you to Hell, then you just get punished for a little while before you get to go to Heaven. It’s also a good way for the church to explain what happens to babies who die before they get baptized or people who lived good lives before Jesus, so they never had a chance to believe in the guy.

Basically it’s a place where everyone sorts their leftover business out before they get to the next world. It pops up in a lot of films and TV shows, like The Sopranos, The Leftovers, What Dreams May Come, Wristcutters: A Love Story, and one of the crappy Hellraiser sequels (don’t bother with any of those films after the second one.)

In Dante’s poem, Purgatory is an island (huh, wonder where people might have gotten the idea that Lost was set there…) with a mountain on it that has several levels where souls are being punished in for different sins  in order for them to redeem themselves and make it to the top of the mountain. Once they get to the top, they have fulfilled their punishment and they can finally get into Heaven.

Drew even uses Dante’s different levels of Purgatory as inspiration for what happens on each floor of the hospital and how the lead character, Ben, has to advance through the hospital and make his way to his own redemption by the end of the film, all the while being hunted by the Ethan Embry’s maniacal villain.

Drew’s interest in the paranormal stems from having his own experiences as well. He tells us a couple of stories in the interview, but my favorite is getting a little otherworldly help while almost drowning. Here’s how he tells it:

[I was] whitewater rafting… but I flipped out of the boat and we got caught in a whirlpool type thing stuck in a whirlpool-type and when I flipped out, I got stuck underneath the raft. And the raft is fairly heavy, much less loaded down with six adults. You float up because you’re wearing a [vest]… I’m trapped under this thing for, according to accounts,  two or three minutes, luckily I was a swimmer at the time so I could hold my breath.

But I had to come face to face with the idea that I might not get out… As audible as I’m talking to you now underwater, as insane as it sounds… I heard “look left” and as I did, there was a shaft of light that looked as solid as a pole sticking out. And I reach for it thinking maybe they had found a stick. My hand went through it and then my buddy had gotten out of the boat and grabbed my wrist…

It could have been fight or flight, I understand, but to me that became reality… it planted that seed.

Hall has some more interesting paranormal stories that he shares with us (including a scary shadow person story!) and he isn’t done with films inspired by real-life paranormal activity, he’s currently working on a script about the latest paranormal urban legend to hit the Internet, Black-Eyed Children (who will get their own episode soon!)

Drew Hall is a filmmaker to keep an eye on because he has a unique cinematic vision and you can tell he cares deeply about the craft. There’s a literacy and depth to his work that is too rare in horror and thriller circles.

Since this conversation centered on horror movies and one of my favorite movie directors and composers, John Carpenter, has a new album out on April 15th (Lost Themes II), we thought we’d do a little electronic instrumental soundtrack homage this week and call it “Purgatory”.